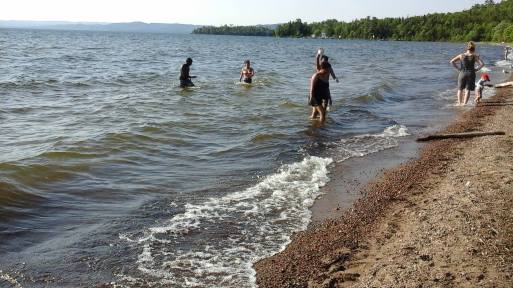 On 29 June 2015, Monday, by afternoon, we checked into Fairfield Inn Hotel of the Marriot group of hotels at Sault Ste Marie. Everyone was in a hurry to take a shower, something they missed for the four days they were out camping. After the shower, Nikhil stretched on his bed and he said that it is a great luxury to have running cold and hot water, a comfortable washroom and a refreshing bath. A soft bed at the end of a tiring day is what looks forward to and one must be thankful to the God and the parents for providing us kids with all these luxuries. I felt that the aim of the camping has been achieved to a great extent.

Nikhil found the Mermon Bible (The Book of Mormons) in the room and settled down on the couch to read it. The Mormons are one of the most successful and prosperous cults that owns large pieces of land in Utah, Hawaii and Canada, along with owning the Marriott Hotel chain, Beneficial Life Assurance Company and many television and radio stations. The cult was started in New York State by a farm worker in the 1820’s named Joseph Smith. Mr Smith was driven to action after he claimed to have been visited by a vision of God and by an angel called Moroni who revealed the whereabouts of buried golden plates to him. The Book of Mormons is based on these very same magical golden plates. Mitt Romney, who ran as Republican Party’s nominee for US President in 2012 election an and who served as the Governor of Massachusetts from 2003 to 2007 belongs to the cult.

In the evening we drove to the Harmony Beach for a swim and dinner thereafter. By evening everyone retired to the bug free environs for a good night’s sleep. After the courtsey breakfast at the hotel, we checked out and drove to Sudbury, about 300 km along Trans National Highway 17. This city of about 160,000 has the most happy people in the country according to Statistics Canada report of 2015. It is also the largest city in Ontario by area and the seventh largest municipality by area in Canada. The city was founded following the discovery of nickel ore by Tom Flanagan, a Canadian Pacific Railway blacksmith in 1883.

We drove to the Science North, an educational resource for children and adults across the province. The centre provides hands-on experience for kids and the exhibits can be handled by kids and they can perform various science experiments. This place is a must visit place for all middle and high school students. Some of the impressive exhibits were:-

At the end of the visit was the film Wildfires! A Firefighting Adventure in 4D. It is a remarkable experience in that it uses 3D film techniques combined with motion seating and special wind, water, scent and smoke effects to explore the science of fire behaviour and firefighting. The film takes you into the heart of a major forest fire to give you a close-up and unforgettable look at how fires are created and ultimately controlled, and how scientific research and practical experience have combined to develop effective forest fire fighting techniques used today. The film captures the valiant efforts of the firefighters and pilots from the Ontario Ministry of Natural Resources’ Aviation, Forest Fire and Emergency Services section – and the equipment and knowledge they use to battle this incredible force of nature.

The entire film was shot during the biggest forest fire in Ontario in nearly a decade. The film also provides visitors with the rare opportunity to ride in a Bombardier 415 Superscooper waterbomber aircraft and experience the intensity of a raging inferno that destroys everything in its path. This aircraft is a Canadian amphibious aircraft specifically built as a water bomber, specifically built for aerial firefighting. These planes move to a pre-reconnoitered lake near the forest fire, then descend from 15 metres altitude, scoop 6,137 litres of water during a 12-second 410 metres long run on the water at 70 knots (130 km/h), then climb back to 15 metres altitude. With the water in their belly, they fly to the place of the fire and discharge this load to quench the fire. That kind of flying takes special skills, training and bravery.

We departed from Science North, had lunch and drove home to reminisce our camping experiences. During the drive the children were more anxious about our next camping and hence I booked for a two day camping at Alogonquin National Park to witness the changing colours of the Fall Season in October.  From the last week of September though October, the leaves in this park are alive with various shades of red, yellow, purple, black, orange, pink, magenta, blue and brown. In the Fall, as daylight hours shorten and temperatures cool, the veins that carry fluids into and out of the leaves are gradually closed off, reducing the chlorophyll contents in the leaves. At this time, the other pigments in the leaves take over and results in a riotous display of colour and then the leaves fall off.

4 thoughts on “The Home Coming”