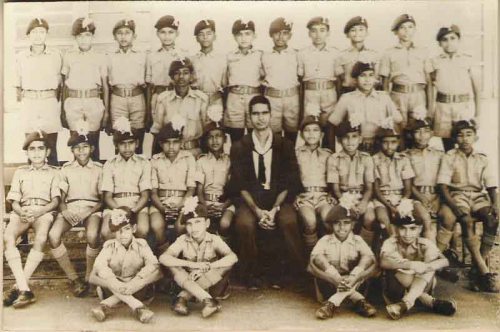 On joining Sainik School in 1971 at the age of nine, I underwent my first run of drill classes.  The Drill Sergeant with his order for Tez Chal (Quick March) always followed it up with “Shoot your Left foot“.  This Left foot first then continued through the training at the Academies and during my military service.

While travelling on a train during my vacation from school in 1978, my co-passenger was a Veteran Sergeant who had seen action with the Royal Air Force during World War II in Burma.  He spoke of a Black & White English movie, ‘The Tie.’  He described a scene where a detective and a constable are tracking a fugitive through the city roads on a foggy winter night.  Only the silhouette of the fugitive is seen and suddenly it stops walking and then walks ahead.  The detective says that it is a woman.  Now, the question of the Veteran was as to how the detective made out that it was a woman.  I had no clue and he explained that women generally commence walking with their Right foot first and men with their Left.  That is why when we march, we are drilled to shoot our Left foot first.  After this meeting, I started observing men and women and the first Right foot applied to women in about 80% cases.  Perhaps the remaining 20% were taught drill by some Sergeant Majors.

Shooting the Left foot first in the military was mainly because the soldiers were mostly right-handed and they carried their weapons the right side.  So when a soldier stepped forward with a Left foot, they were in a better balanced fighting posture, with Right foot planted and weapon up, ready for action.  It was also to keep everyone on the same foot for advancing in a line. In the olden day battles, soldiers advanced together ahead in formation, so that the enemy could not break the lines. In order to do this they used drums to keep everyone in line and together and commenced the march on the Left foot.  Every time the drum struck, their Left foot hit the ground.  Modern Armies across the globe follow this to keep everyone in step while marching, more to instill discipline and team work and for a ‘Soldierly’ look while moving in a group.

In the military, one always walked on the left side of a superior officer.  In other words, one always kept his superior on his ‘Right’ side.  This was to facilitate him to return a salute with his Right arm without poking his arm into someone on his Right. 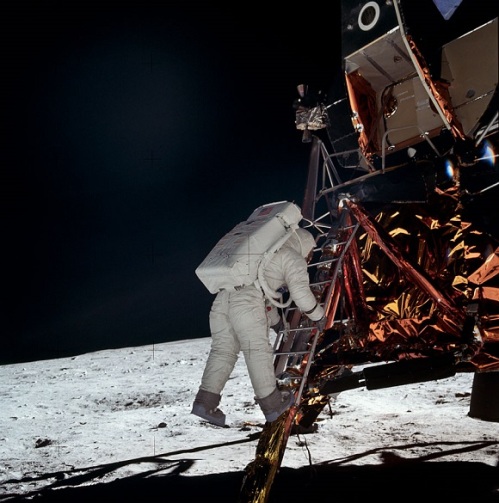 We are all familiar with the famous first words of Neil Armstrong as he stepped foot onto the moon in 1969, ‘That is one small step for man and one giant leap for mankind.’  Surely no one would have been there to photograph this one small step.  The second human to set foot on the moon was Buzz Aldrin and the instant was captured by Neil Armstrong.  In this image (courtesy NASA),  Aldrin is seen landing on the lunar surface with his Left foot, that too in rearward motion.  Perhaps,  a mere coincidence or the sheer logic of the number of rungs in the ladder!

In this connection, a bit of mythology may interest the reader. Nataraja, the Hindu God Shiva as a cosmic dancer, is depicted in idol form in most temples of Kerala and Tamil Nadu, balancing on his Right foot with his Left foot up.  The only exception being the Nataraja idol at Meenakshi temple, Madurai.  It is believed that the Pandya King who commissioned the temple wanted to give some relief to Natarajan’s Right leg, at least in the temple constructed by him.

God Shiva with his consort Parvathi is mostly depicted sitting and in most cases, Shiva has his Left foot folded up and Parvathi her Right.  As per Hindu mythology, Shiva represents the Purusha (male) and Parvathi the Prakrithi (nature or female).  Some Hindu mythological art portrays gods with both feet on together on the ground and this may be the depiction of combination of Purusha and Pakrithi.

When an Indian Bride enters a home, she is advised by her mother-in-law to enter with her Right foot first, but no such instruction is ever passed to the groom.  During many Hindu marriages, the groom ritually places the Right foot of the Bride on a grinding stone.  The mantras recited during this time advise the bride to lead a firm life like the grinding stone, to be as firm as a rock, so that the family can depend on her.

Most Hindu Goddesses are often depicted with their Right leg folded up, depicting Prakrithi.

This may explain as to why women commence their walk with their Right foot.