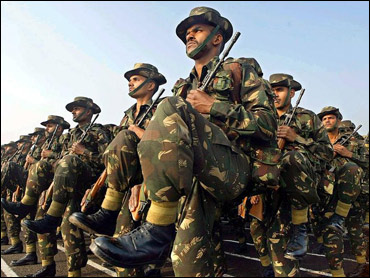 ‘Army marches on its stomach‘ is an age old military adage attributed to both Napoleon and Frederick the Great. This saying gives out the importance of the army being well-provisioned, well –administered and well-fed. With my service of over two decades with the Indian Army, I felt that the Army marched more on its ‘knees’ more than its ‘stomach’.

During a military tactical exercise we underwent while at the National Defence Academy (NDA) in October 1981, we were lead by Captain Raj Mehta, now a retired General. We were about 12 cadets, all at their zenith of physical fitness and with real razor-sharp minds, least bothered about the scratches rendered on our skins by the wild thorny bushes and who could least be worried about many falls and rolls one had to endure during such training. The sharp mind coupled with agility would ensure that all the cadets stood up and continued with the task at hand as if nothing had happened, even after a ten feet fall.

Captain Raj Mehta was 33 years old, but still young at mind and physique, was training us in jungle warfare on a pitch-dark new moon night in the hilly terrains of Pune, India. He would ensure participation of each and every cadet, whether it was a discussion or a tactical exercise and had a knack of extracting points of view from every cadet. This instilled a lot of confidence in us and along with learning the operational concepts, he succeeded in turning us into leaders of men. Honour, trust in the subordinates, accepting wrong doings with humility, taking on failures with a lion’s heart, being true to one-self were a few traits I imbibed from him as cadet at the age of nineteen and I am sure it was the foundation stone for my army career ahead for the next twenty-two years.

Captain Mehta stood out among all our instructors in that he had a lot of trust in the cadets and many a times accepted all our fake stories and excuses with an uncanny smile. We all thought we succeeded in ‘fooling’ him, but later in life realised his magnanimity, especially after bringing up our children through their teens. I carried this aspect of trust and it really helped me to command my unit, where in I delegated a lot of the tasks to the junior leaders and Havildars (Sergeants) as I had to look after our children being a single parent then.

On that night, Captain Mehta was with the Cadet Ajay Sharma (now a retired Colonel), appointed as the section commander with two other cadets leading the section as the points-men. We were moving downhill through the jungle in a single-file section formation.   Suddenly the section commander and Captain Mehta disappeared to be found in a ditch about 10 feet deep. They both came out and we continued with the exercise. At the end of the exercise at about 10 PM, Captain Mehta debriefed us and one could see a bit of discomfort on Captain Mehta’s face. The next morning we found Captain Mehta with a bandaged knee and a plastered right hand. He had suffered a fracture of the wrist joint and was put in plaster for six weeks. He did not take a day off and he adapted to driving his Vespa with one hand. The very same knee troubled him later on too. Despite the troublesome knee, General Mehta as a Divisional Commander was known for visiting all the posts in his Division, mostly located above 10,000 feet above Mean Sea Level.

As a young Lieutenant I served under Colonel Mahaveer Singh, our Commanding Officer. Colonel Mahaveer, a Rajput and a humble man with a large heart. He would look after all the young officers as his children and many a times accepted all our pranks and (mis)adventures with a great spirit. He let the young officers take on responsibilities and would encourage and motivate us to put in our best and accomplish the impossible. No wonder that our unit was the best in the formation and young officers from other units of the formation always looked forward to getting attached to our unit and spend a few days with us. All of them were surprised to see the relationship all the young officers had with Colonel Mahaveer, how we used to play basketball with him, share a joke, narrate an incident and above all the movie stories he narrated without losing any of the expressions, especially ‘Sharabi’. Colonel Atul Mishra, Colonel Anupam Gaur, Brigadier Mike Iyer were a few I recollect enjoying these stories as young Lieutenants.

While climbing with Colonel Mahaveer to a post in the Northern Sector, located at about 12,000 feet, he found my pace a bit straining. Colonel Mahaveer was fifty years old and I was twenty-five, half his age. Colonel Mahaveer had suffered a ligament tear on his knee as a result of playing soccer. After about half an hour of climb, we sat down to rest and then Colonel Mahaveer advised me “Look after your knees, else you will suffer my plight at this age. Without a fit knee, you would be a useless soldier”. I accepted the advice and it ensured that I kept my knee always safe and sound.

After penning down this article I decided to obtain the approval of General Raj Mehta, prior to placing it in the public domain. “While the name makes the anecdote more real you could drop the name as the message it conveys remains unaffected” was the General’s stand. I debated in my mind the General’s request of dropping his name – and at last I ruled to go ahead with the name to give the article the real “Punch” rather than talking in a general term about a real General.

3 thoughts on “Army Marches on Knees”