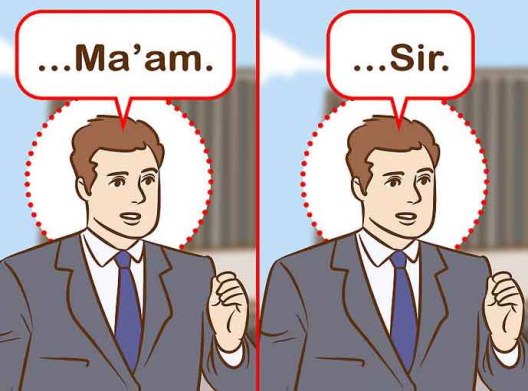 ‘Sir’ is a term for addressing males who have been given certain honours or titles (such as knights and baronets) in Commonwealth Countries and is strictly governed by law and custom. The term is also commonly used as a respectful way to address a commissioned military officer – surely not civilians. Equivalent term in the feminine gender would be ‘madam’ and a young woman, girl, or unmarried woman may be addressed ‘miss’. A knighted woman or baronetess is a ‘Dame’ and a ‘Lady’ would be the wife of a knight or baronet.

In Kottayam, Kerala, there is a girls’ school called Baker Memorial Girls High School. The school was established by Amelia Dorothea Baker (1820-1904) of the Church Missionary Society (CMS). Miss Baker married John Johnson, another CMS missionary, who passed away in 1846. Miss Baker remained in-charge of the school in Kottayam till 1855. Her two sisters married CMS missionaries and three daughters of her brother Henry Baker Jr became teachers at the very same school. (Biographical Dictionary of Christian Missions, edited by Gerald H Anderson, Page 336)

The school today stands as a memorial to celebrate the efforts of the three generations of missionaries who dedicated their lives for the empowerment of the women of Kottayam through education.  Common folk of Kottayam until my student days called it as Miss Baker School. Remember, it was during the British Raj and everyone addressed the founder headmistress of the school, very respectfully, as ‘Miss Baker’. Today, could any student in the very same school address their teacher ‘Miss Anita?’ I have often heard them addressing their teacher as Anita Miss (I could never make out as to what Miss Anita ‘missed’!)

On joining Sainik School, Amaravathi Nagar, Tamil Nadu in Grade 5 in 1971, our first Class-Master was Mr MJ Raman, our Mathematics teacher. We were about 25 of us from Kerala and only one could understand English and the rest 24 of us knew only Malayalam. In the first class Mr Raman issued us all the books, stationary, etc and briefed us in English and surely I did not get any of what he said.

We then had English class by Mr KG Warrier. He asked us something like “Who asked you to do it?” in his Oxford accent and the boy who knew a bit of English promptly replied “Raman Sir told us to do it.” Mr Warrier now said “I know that Dr CV Raman was knighted, but did not know that Mr MJ Raman was also knighted. You all will address your teachers as ‘Mister’ or ‘Miss’ followed by their surnames.” Those words were imprinted on our young minds and through all these decades until now, we have always revered our teachers but invariably addressed them as ‘Mister’ or ‘Miss’, orally and in writing. Culturally, in Kerala as well as the rest of India, these modes of address have undergone a ‘mutation’. Today, it would be sacrilege for a college student to address his professor as ‘Mister Singh’

In Canadian high schools, students mostly address their teachers as ‘Mister’ or ‘Miss’ followed by their surnames. In universities, some professors during their introduction class would specify their requirement. Some want to be addressed in the traditional manner and many with their first names or even shortened first names.

While interacting with an Indian immigrant teacher in Canada, he said he felt uncomfortable when the students addressed him as ‘Mr George.’ He had taught in a college in India for over two decades and everyone addressed his as ‘Sir’ and he felt that the Canadian students are disrespecting their teachers by not addressing them as ‘Sir.’

Addressing male teachers as ‘Sir’ and all females irrespective of marital status as ‘Miss’ shows a massive status disparity and sexism of previous years. According to Times Educational Supplement, ‘Sir’ was first used in Sixteenth Century classrooms when male teachers of a lower social standing were attempting to reinforce their authority among largely upper-class boys. ‘Miss’ (surely not anywhere near the status of ‘Sir’) is largely a Victorian era creation when women were pressurised to give up work after they married, with a number of schools only hiring single female teachers.

In the Dutch education system, children address teachers by their first name, using ‘juf’ or ‘juffrouw’ as a title for a female and ‘meester’ for a male teacher. Australians address their teachers as Mr/Mrs/Ms and surname. Sometimes if a teacher has a long or difficult-to-pronounce name, it is shortened to Mr PK, etc.

In Finland, it’s first names or even nick-names with teachers, no titles or surnames. The whole society there is very informal. French kids use the terms ‘maîtresse’ and ‘maître’ for female and male teachers respectively, meaning simply ‘teacher’. German students address teachers by using ‘Herr/Frau’ and surname, using ‘Sie’ as the polite form (Herr Schmidt, Koennen Sie…).

4 thoughts on “To Sir Without Love”