During the third week of September 2017, we travelled to Bermuda for a week’s vacation. Bermuda is Britain’s oldest and smallest British Overseas self-governing (except for external affairs and defense) overseas territory. It lies 1000 km East of USA in the North-West Atlantic Ocean. Bermuda is about 56 square km in total land area, a cluster of six main islands and 120 small islands.

We landed at LF Wade International Airport, the sole airport connecting Bermuda only to Canada, USA and UK. It is named in honour of Leonard Frederick Wade, Leader of the Opposition, who passed away in 1996. Bermuda is home to registered corporate offices of many multinational business entities, particularly for investment, insurance, reinsurance and real estate companies. Tourism is the other major industry.

We drove to the Hotel in a Taxi. Being a British territory, all vehicles are Right-Hand drive unlike the Left-Hand drive ones in Canada and USA. The electric power supply is 110 Volts and not 220 Volts. Please click here to read more about it. 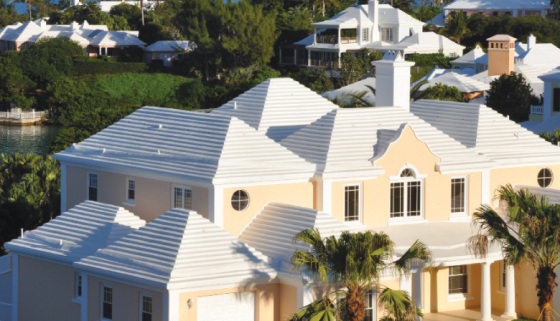 As we drove through, the pastel coloured houses with slanting white roofs caught my attention. The roofs are designed to harvest rain. The steps slow down heavy rainfall helping the gutters to collect the water and store it in a tank under the house. The tanks get topped up regularly with every rainfall and every home is self-sufficient for water. There is no governmental or municipal water supply system in Bermuda.

Bermuda is not blessed with any fresh water source like lakes, rivers or ponds. The lakes and waterholes hold brackish water, hence unfit for human consumption. As Bermuda gets abundant rainfall, well distributed all through the year, the early settlers were forced to harvest rain.

The design of the slanting white roof has multiple benefits. It is mostly made of limestone and hence is heavy and not easily shifted by hurricanes or heavy winds. The white paint help reflect ultra-violet sunrays, thus keeping the homes cool.

Bermuda is the only country where the national dress for men is known by the country’s name. It is worn by male Bermudians and visitors from all walks of life for business and  parties. It is a colourful shorts, worn three inches above the knee. Bermuda Shorts are not uniquely Bermudian, but were originally worn by British military forces. It was designed as a light attire for the British Military while deployed at British garrisons in tropical and sub-tropical colonies of the erstwhile British Empire. 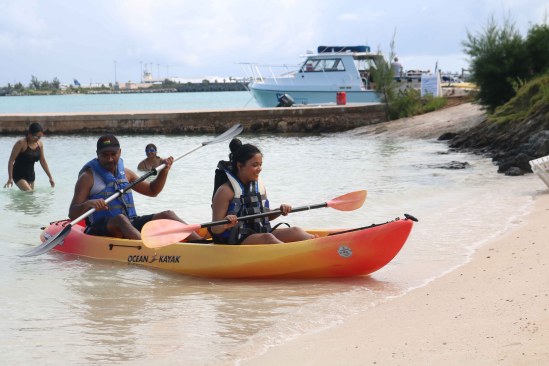 We spent five days in Bermuda, swimming and relaxing on its beaches. The beaches are characterised by its pink textured sand and turquoise blue water. We also enjoyed Kayaking in the serene quiet waters. 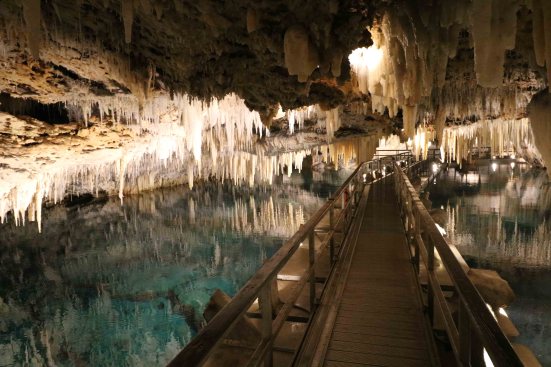 We visited the Crystal Caves on a guided tour- a journey of amazing natural beauty – on pathways of floating pontoons spanning a crystal clear underground lake, about 50 feet below ground level.

Mark Twain, one of the first visitor to this wonder of Mother Nature wrote in a letter “The most beautiful cave in the world, I suppose. We descended 150 steps and stood in a splendid place 250 feet long and 30 or 40 wide, with a brilliant lake of clear water under our feet and all the roof overhead splendid with shining stalactites, thousands and thousands of them as white as sugar, and thousands and thousands brown and pink and other tints.” 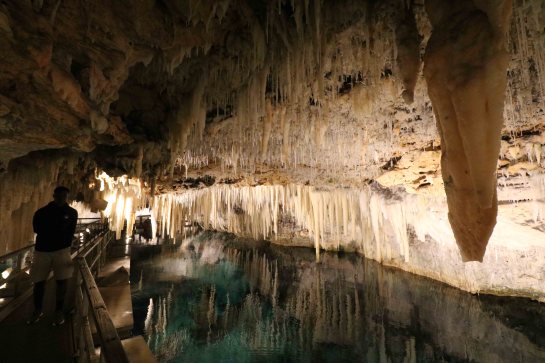 Crystal cave was discovered in 1907 when two young boys were attempting to retrieve a lost cricket ball. They saw the ball dropping into a large hole. As one of them went deeper and deeper into the hole to fetch the ball, he realised that it wasn’t an ordinary hole. It was leading to some wondrous cave.

The owner of the property Mr Wilkinson was immediately informed. He then used a rope and lowered his 14-year old son through the hole. At a depth of about 120-ft and using a bicycle lamp, his son for the first time saw the wonder of the caves. The hole through which the boys entered is still visible.

The dramatic formations of stalactites and stalagmites which are crystal-like pointed structures naturally formed out of limestone rocks, offer an awesome view. A stalactite is an icicle-shaped formation, with a pointed tip, that hangs from the ceiling of a cave. It is produced by precipitation of minerals and lime from water dripping through the cave ceiling. They grow at a yearly rate of about 3 mm. 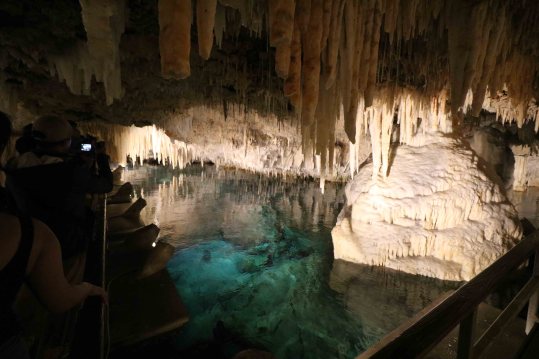 A stalagmite is an upward-growing mound of mineral deposits that have precipitated from water dripping onto the floor of a cave. Most stalagmites have rounded or flattened tips.

When a stalactite touches a stalagmite it forms a column as seen on the Right side of the image, which will surely take thousands of years.

Different chemical elements along with the limestone give different colours to the stalactites and stalagmites. Iron and other minerals, as well as acids from surface vegetation, combine with calcite crystals to add shades of red, orange and black.

Crystal Cave, just like other caves in Bermuda, formed, when sea level was considerably lower than now. When the Ice age ended and glaciers melted, sea level rose and inundated the beautiful cave formations. 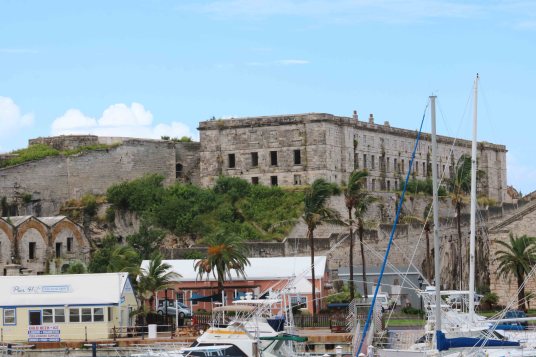 We Visited HMD Bermuda (Her Majesty’s Dockyard, Bermuda) after a 30 minute ferry ride. This base was the principal base of the Royal Navy in the Western Atlantic between American independence and the Cold War. After the closure of most of the base as an active Royal Navy’s dockyard in 1957, the base fell into a state of disrepair. Storms and lack of maintenance caused damage to many buildings. Beginning in the 1980s increased tourism to Bermuda stimulated interest in renovating the dockyard and turning it into a tourist attraction. The Naval Air Station located here was called HMS Malabar by the Royal Navy, after the Indian princely state, now forming part of Kerala State.

Bermuda Triangle, for sure everyone must have heard about it; it did not engulf any of us. It is surely a myth. Even if it is not, I have no place there. I would better stay in Bermuda.