Growing up as a child in the ‘God’s Own Country’, – Kerala – in Amayannoor village of Kottayam District, I was fascinated by the trees, mostly due to the variety that grew in our homestead. Our parents bought this land in 1958 as Amma was a teacher in the village school. Our father decided to move away from our ancestral village to Amayannoor, 15 km away. He wanted to be close to Amma’s school which was just five minutes walking distance – all to ensure her maximum presence at home as we children were growing up.

Some of these ‘companions’ of mine, on which we children climbed as exercise, entertainment and also to bring down their fruits for Amma to cook; their memories linger in my mind. Many of these trees are now uncommon even in rural Kerala.

At the Western end of the homestead grew a Breadfruit (Artocarpus Altilis) tree. The Breadfruit tree in Malayalam is called Kadaplavu – loosely translated to be ‘tree of debt.’ From this name must have originated the local myth that if a Breadfruit tree grew in the homestead, the family might end up in heavy debt. As if to prove their point, many locals advised our father to cut down the tree saying that the previous owners were ridden with debt and it resulted in them selling the land and migrating to the hills of Wayanad. Our father being a rationalist refused to heed to their words. Fortunately, it remained a myth and we were never indebted to anyone as the Breadfruit tree grew luxuriantly and died a natural death about 30 years later.

The breadfruit tree is a fast growing tall evergreen tropical tree, reaching a height of 20 meters, with many spreading branches. The leaves are large which are deeply cut into lobes. It is believed to be native to New Guinea and is now cultivated throughout the tropics for its tasty fruits. A fully grown Breadfruit tree produces up to 200 fruits per year. The fruit is usually the size of a large cantaloupe, but looks like a smaller cousin of the Jack-fruit. 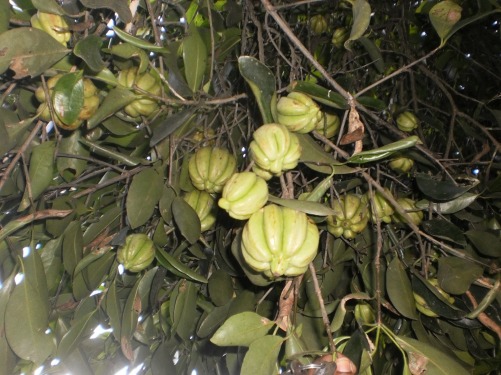 A key ingredient of the Syrian Christian Fish Curry, specially the Kottayam variety, is the Kudampuli (pot tamarind), also called the Malabar tamarind (Garcinia Gummi-Gutta), a special variety of tamarind that grows only in Kerala in India. A Kudampuli tree stood adjacent to the Breadfruit tree and its fruits ripened in May-June, well before the monsoons. On the garb of plucking the fruits, we children  climbed the tree in the evenings and various monkey tricks followed.

The fruit of the kudampuli looks like a multi-lobed pumpkin, the size of a tennis ball, yellowish-red when ripened. We used to break open the fruit to relish the tangy-sweet pulp around 12 seeds inside. The outer covering of the fruit is then sun-dried, smoked over the chimney and then stored.

When I landed in Canada in 2004, there were many Health Supplement stores selling extract of Kudampuli to help speed up weight loss, reduce appetite, and boost exercise endurance. It was claimed that this extract contained Hydroxy-Citric Acid (HCA) that may inhibit an enzyme that helps your body store fat.

This might have prompted a study by Columbia University College of Physicians and Surgeons, New York, which concluded that it had only a placebo effect to help lose weight. A word of caution; some other studies also found that the fruit extract contained some liver toxins. Be that as it may, we still use Kudampuli in Kerala and also here in Canada as an essential ingredient in our fish curry recipe.

Next to our house grew an Irumban Puli or Bilimbi (Averrhoa Bilimbi) tree, another tamarind variety. Its fruits were cooked as a curry and was also pickled for later use. The tree was about 10 meter tall with its leaves similar to curry leaves, mainly clustered at the branch tips. The fruits grew mostly on the main trunk and the thick branches that emanated from the trunk. We used to relish it raw with a bit of salt.

The tree being short, did not have much entertainment value for us kids, but the brood of hens we reared spent their night on this tamarind tree. In spite of all the tricks that we tried, they refused to go into the coop built for them. In the evenings they perched on this tree with the rooster on the top with the hens and other cocks below him; typically, echoing the idiom ‘ruling the roost’. The rooster crowed at the break of dawn, announcing to the world his presence and dominance in the brood. It also served as an alarm for our father, who woke us all up and commence the morning prayers. 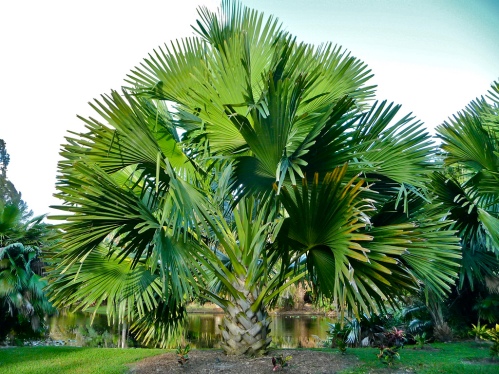 Another interesting tree was Kudappana (Literal translation from Malayalam is Umbrella palm tree) or Talipot Palm (Corypha Umbraculifera), one of the largest palms in the world, growing to a height of 25 meter. The plant’s single trunk is straight, un-branched and cylindrical, one meter in diameter and ringed with prominent leaf scars. The top is a crown of immense, fan-like leaves; a single leaf-blade at full size being as much as 5 meter in diameter, with a leaf-stem 5 meter long. The leaves are used for thatching, making fans, mats and umbrellas. 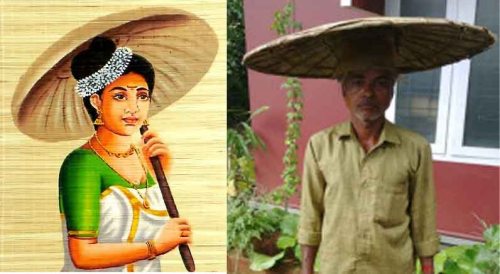 We had three such trees growing in our homestead, but we were too scared to climb it being very tall and they did not offer any branches to rest during any such endeavour. These trees were cut down as we shifted to rubber cultivation from tapioca cultivation.

The Talipot Palm tree only flowers towards the end of its life, usually at around 80 years of age. It then produces a spectacular display with an inflorescence up to six meter long containing several million flowers. I have never witnessed this event in my life as almost all of the Talipot Palms in our village have been cut down before flowering. Talipot Palm is today categorised as ‘Threatened Species.’ In Trivandrum, there is a locality called Kudappana Kunnu (Umbrella Palm Hill); sadly, now there is not a single tree of the genre which gave the locality its name. 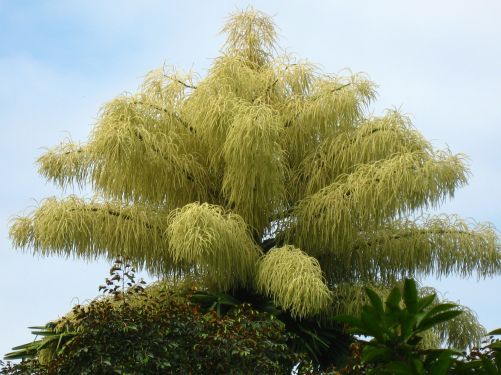 The fascinating aspect of Talipot Palm was not the tree itself, but the tiny Draco lizard or Flying Dragon (Draco Volans), flying from one Talipot Palm tree to another in search of insects, its main food. With the cutting down of Talipot Palms, these little creatures too vanished from our village. 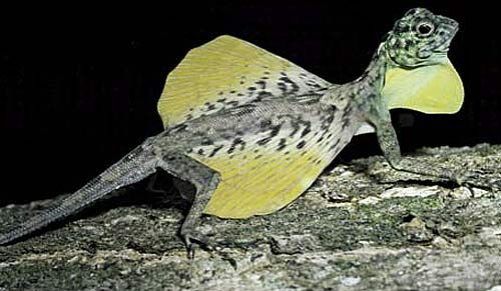 These so-called flying dragons are wonders of evolution with elongated ribs, which extend and retract. Between these ribs are folds of skin that rest flat against the body when not in use, but act as wings when unfurled, allowing it to catch the wind and glide. These lizards use their long, slender tails to steer themselves, and each sortie can carry them up to 20 meter.

These brown coloured lizards have a spectacular flap of skin on the bottom of their necks called a dewlap. This is bright yellow in males and bluish gray in females. These dewlaps become visible when they make their shrill calls, either to chase away rivals or to attract their mates.

“Trees are poems that the earth writes upon the sky.” – Khalil Gibran (Lebanese-American writer and poet)

7 thoughts on “Trees : My Childhood Companions”