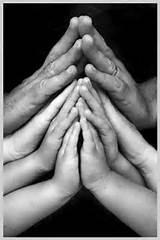 Morning and evening family prayer has been a ritual followed in our family as far as I can recollect. Our father would lead the prayer real loud (could be because he was a Headmaster and our grandfather who was also a Headmaster, prayed much louder) and we all would follow suit. As a child I never understood the meaning of whatever I said during the prayers and also what was the intention of such an act. I always perceived it as a punishment our father meted out to all his children for their unruly behaviour. I actually realised the value and importance of it only after I joined the Indian Army.  (Please CLICK HERE read my blog on Soldier Gods)

The family evening prayer used to begin at 9 PM with our mother singing a hymn followed by one of the children reading a passage from the bible. The actual prayer would commence after that and it used to last about five minutes. At the end of it everyone was expected to observe a minute or two of silent prayer. I never knew what to pray for most times, but I also sat silently. During the lent, we had special prayers and the duration extended for another five more minutes.

With advent of the Television beaming out many tear jerking serials, our parents by then retired from teaching, also got addicted to many of them. In Kerala due to power shortage we have half an hour power-cut on weekdays in the evening. The timing of the power-cut used to change every month and now the evening prayer time was dictated by the power-cut, as that was the time our parents could not watch any serial.

My main chore when I came on vacation was to draw water out of the well in the courtyard using the pulley-rope-bucket system. In those days we did not have the pumping facility. This was the toughest chore among all and as I was away most of the year at school, my brothers wanted a relief and I did not mind it. Drawing of water would begin by 6 AM and would end only by 9 AM as water was needed for drinking, cooking, bathing, washing and also for the animals in the shed. Last requirement of water was for my mother to bathe before setting out to the school and by that time everyone else would have left home for their schools/ university. This water drawing chore continued till I turned a teen as by that time a pump set was installed with pipes to distribute water to the kitchen, bathrooms and to the cowshed. During our last visit home, I wanted to show our son the pulley-rope-bucket system, but I could not find it anywhere.

Behind our house lived Vasu and Chellamma with their two daughters and son. Vasu was a daily wage earning farm hand and Chellamma made a living out of rearing cows and goats and selling milk to the neighbourhood. One day Shankara Panikkan (Please read my blog on Shankara Panickan by CLICKING HERE) died at about 5 AM. We all went to Panikkan’s home to console the family. By about 7 AM Chellamma came running to  Panikkan’s home saying that she did not wake up early in the morning as George Sir (our father) did not pray that morning as we all were at Panikkan’s home.

That was when we realised that the loud morning prayers at our home also served as a wake-up call for the neighbourhood (It would have surely woken up the God Almighty too).