During our visit to India to attend the Golden Jubilee celebrations of raising of our regiment – 75 Medium Regiment (Basantar River) – we watched the Retreat Ceremony at Hussainiwala Border Post.

Railway line connecting Peshawar to Mumbai was built in 1885, passing through Hussianiwala.  During the Pre-Partition days, Punjab Mail connected the cities of Mumbai, Delhi, Ferozepur, Lahore and Peshawar. In those days, most British troops and businessmen would arrive at Mumbai and make their way to their destinations in the North-West Frontier Province by train. The train track from Ferozepur to Hussainiwala was an engineering fete, with Qaiser-e-Hind bridge, which stood over several round pillars (all of them intact even today, as depicted in the image above).

Hussainiwala is named after a Muslim Peer (Saint), Hussaini Baba, whose shrine is located at the entrance to the Border Post.  This small hamlet came into prominence on the evening of 23 March 1931 when British soldiers tried to cremate the bodies of three young Indian freedom fighters – Bhagat Singh, Sukhdev and Raj Guru – who were hanged at the Lahore Central Jail.  The hanging, scheduled for 24 March was rescheduled a day earlier as the British feared a revolt in Lahore as the situation had become very tense.  They  secretly transported their bodies to Hussainiwala and while cremating them on the banks of the Sutlej, the locals got wind of it.  They assembled near the cremation site.  Fearing repercussions, British soldiers fled the scene, leaving behind the dead bodies which was cremated by the villagers.  This site today is a memorial – aptly called ‘Prerana Sthal‘ (Motivation Site).

Later Bhagat Singh’s mother, Vidyawati, and freedom fighter BK Dutt were cremated at this site as per their wishes. The cremation site is called ‘Shaheedi Sthal’ (Martyyrs’ Place).   This is where Indians from all over the country make an annual pilgrimage to honour the martyrs on March 23 as they observe ‘Shaheedi Diwas’ (Martyrs’ Day).

This enclave has witnessed three bloody battles between India and Pakistan,  with the very first one fought on 18 March 1956.  At that time, heavy floods had damaged Bela Bund and Sulaimanki Headworks at Hussainiwala and as the Indian engineers were repairing the damage, Pakistan Army launched an unprovoked attack at 9 PM.  4 JAK RIF was guarding the bund, and they fought  gallantly causing heavy causalities on the enemy.  This resulted in a hasty withdrawal by the attackers.

During partition of British India in 1947,  Hussainiwala, an enclave of 12 villages went to Pakistan. The railway line no more had trains running through Hussainiwala.  The railway station at Hussainiwala as it exists today is depicted in the image above.  Now Punjab Mail connects Mumbai to Ferozepur via Delhi.  Pakistan destroyed  Qaisere- Hind Bridge leaving behind the round pillars across the river. The Shaheedi Sthal was in a dilapidated state without any maintenance. In 1961, Jawaharlal Nehru, then Prime Minister, brokered an exchange deal and Hussainiwala came to India while Sulaimanki Headworks –  from where three major canals which supply irrigation water to a large area in Pakistan  Punjab originate –  went to Pakistan. India immediately restored Shaheedi Sthal to its due dignity and reverence.

During Indo-Pakistan War of 1965, 2 Maratha Light Infantry (Kali Panchwin) was deployed to defend Hussainiwala. The battalion fought valiantly to thwart a  frontal attack resulting in two enemy tanks destroyed and two captured, with several enemy killed. The Commanding Officer Lieutenant Colonel Nolan was killed in enemy artillery shelling. The unit ensured that the Samadhi of Bhagat Singh was not desecrated by Pakistan Army. The battalion was visited by then Prime Minister Lal Bahadur Shastri, Defence Minister YB Chavan, Congress Party President  K Kamraj, the Chief of Army Staff and other senior officers. Kali Panchwin was awarded the battle honour ‘Hussainiwala’ for its role in the 1965 War. The citizens of Firozpur, in honour of the Battalion’s contribution in defending the Bridge and Firozpur town, presented a silver replica of the Hussaniwala Bridge.

During the 1971 War, it was 15 PUNJAB defending Hussainiwala enclave and the Memorial.  On 03 December, Pakistan Army launched a heavy attack.  The valiant Punjabis withstood the attack gallantly despite suffering heavy casualties until withdrawing on 04 December night. 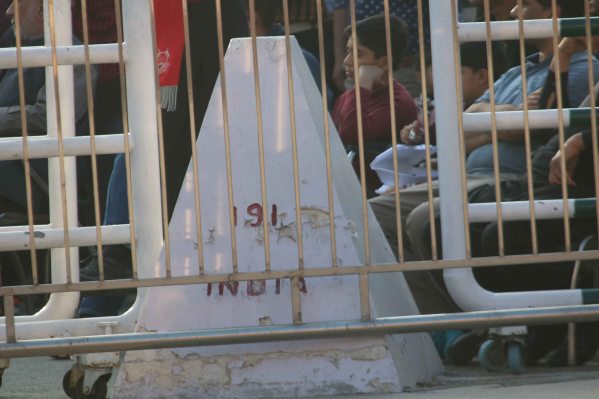 Did the three freedom fighters, who laid down their lives for Indian independence in their wildest dreams ever visualise that post independence, there would be a partition on religious lines and it would all end up in three bloody wars at the very same site their ‘Samadhi’ stood?

People generally handle and deal with currency notes vertically rather than horizontally. People ‘tell’ (count) the notes, holding the bundle vertically.  They tend to hold an open  wallet or purse vertically while searching for notes.   Most people hand over notes to one-another vertically rather than horizontally, especially when making purchases.  All machines like Automated Teller Machines (ATM), vending machines, etc accept notes vertically.  Thus it appears that vertical note makes more sense.  Bermuda, Brazil, Cape Verde, Israel, Switzerland, and Venezuela have adopted vertically oriented currency and now Canada has also joined them by issuing a vertically oriented $10 note.  Early Chinese banknotes were also vertical, due to the direction of Chinese writing.

Many countries have different colors for their notes as it is one of the best ways to distinguish one note from another.  USA issues only green backs which traces its history to 1861, when US government issued paper money as a means of financing the American Civil War.  The backside of these notes were printed with green ink as an anti-counterfeiting measure.  Green colour was chosen to avoid photographic duplicates, since the cameras of the time could only take black and white pictures.  Thus these notes came to be known as ‘Greenbacks.’  In order to cut down on manufacturing costs, US government shrunk the size of all paper money and instituted standardised designs for each denomination, which made it easier for people to tell real bills from fakes. The small-sized bills continued to be printed with green ink because green ink was plentiful and durable and green colour was associated with stability.

Various images on the notes relate to the value of each note.  These images depict the history of the nation, its culture,  its important personalities, historical events, national achievements, monuments etc, to be educational, for its citizens and also for the others handling the currency.

On 08 March 2018, on the International Women’s Day, Canadian Finance Minister Bill Morneau and Bank of Canada Governor Stephen S Poloz unveiled the new $10 bank note featuring Viola Desmond.  It was the first time that an iconic Canadian woman is portrayed on a regularly circulating Bank of Canada note.  She became the first black person and the first non-royal woman ever to appear on regularly circulating Canadian notes.  Please click here to read about my earlier post ‘Canadian Woman on Banknote.’

The note also features the Canadian Museum for Human Rights—the first museum in the world solely dedicated to the evolution, celebration and future of human rights. Also depicted on the note are an eagle feather—representing the ongoing journey toward recognising rights and freedoms for Indigenous Peoples in Canada—and an excerpt from the Canadian Charter of Rights and Freedoms.

This new $10 note is the first vertically oriented bank note issued in Canada. This will allow for a more prominent image of Viola Desmond and differentiates this new $10 note from the current polymer notes.

Viola Desmond was selected for the new $10 bank note by Minister Morneau following an open call to Canadians to nominate an iconic Canadian woman for the next redesigned bank note. A successful Black Nova Scotian businesswoman, Desmond is often described as Canada’s Rosa Parks after she refused to leave her seat in the ‘whites only’ section at the Roseland Theatre in New Glasgow, Nova Scotia, in 1946.

Desmond, then aged 32, was dragged out of the theatre by police and jailed. The civil rights activist was convicted of defrauding the province of a one-penny tax — the difference in tax between a downstairs and upstairs ticket.

Segregation was legally ended in Nova Scotia in 1954, in part because of the publicity generated by Desmond’s case.  Desmond died in 1965. The province of Nova Scotia apologised to her posthumously, 45 years later.