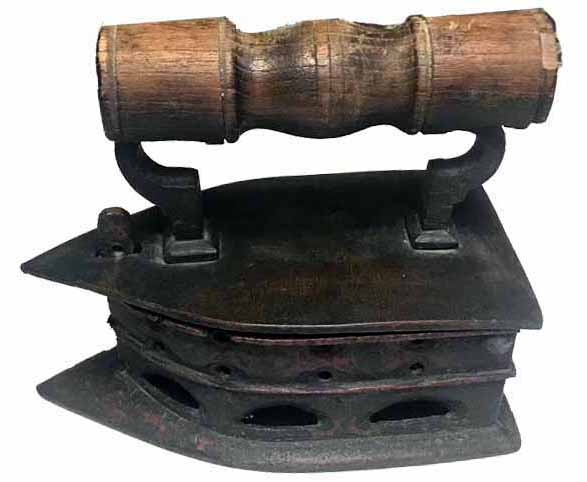 During our young days, we had an iron box – Theppu Petti – heated by burning coconut shells to embers.  The iron box was not made of iron, but brass, weighing over five kilograms.  It had a cover over a hollow cavity with holes on either side, looking more like our eyes.  These eye-lets acted as air-vents to keep the embers glowing.

A metallic flap attached at the back covered the cavity. On top of the cover was a teak handle, hand-carved  to fit the operator’s hand.  The ‘Delta’ shaped base, called the sole, facilitated easy gliding of the Theppu Petti over the cloth under it.  The sole was heated to about 200°C by the burning embers.

Theppu Petti is the predecessor to the modern electric steam iron.  The electric iron was invented in 1882 by New Yorker Henry W Seely. His iron weighed almost seven kilograms and took a long time to warm up.  Irons gradually became smaller until they resembled the type we have in our homes today.

The iron box did its job of pressing a piece of cloth to remove creases using a combination of a hard surface, and heat and pressure that pressed on the fibres of the clothes, stretching and flattening them.

Using a Theppu Petti to iron a piece of cloth, the operation commenced with placing the monstrous looking object on a metallic ring on the table.  The metallic ring protected the table from getting burnt.  The ironing table back then was nowhere akin to the modern ironing boards, but was a multi-purpose large table (mostly the dining or study table) covered with an old blanket and a bed sheet.

Four or five coconut shell-halves were placed in the hollow cavity of the Theppu Petti and burnt to embers, which took about 15 minutes.  These embers emitted constant heat for a long time and maintained a near constant temperature.  Kerala households had a large stock of coconut shells and burning them in the iron box were their primary use.  Some used charcoal in place of the coconut shells.

When we were young, our father ironed our clothes until our eldest brother turned ten.  Then he took over the operation and did the job with panache.  When our youngest brother turned ten, the mantle was passed on to him and he became such an expert that he would put any professional cleaner to shame.  Now it is a ritual for him on Sundays to collect the white shirts and black pants of my elder brother, an advocate, and press the entire stock for a week.  He presses all my clothes while I was home and also for the entire household.

തേപ്പ്  – Theppu is a modern Malayalam word which means ‘ironed’. As slang, it refers to a girl  who dumps their lover when they see a better prospect.  The word, though sexist, finds its way into modern Malayalam movies and social-media trolls.

While serving with the Indian Army in Maharashtra, a Priest from our  Syrian Orthodox church visited me.  His wife hailed from our village and her family was well known to ours.  I invited him for lunch and after that took him to the shopping centre at the Cantonment as he wanted a heavy electric iron box to press his long white cassock.  He couldn’t find a heavy iron box in the market as the modern one’s were light.  He presumed that the Cantonment’s shopping centre would have it as the soldiers always had to press their thick uniforms.

During my next visit home, I narrated the incident to Amma and she passed her characteristic sly smile, which meant there was more to it.  I prodded her and she reminisced the days of 1957 when she was just married and they moved into a small rented one-room house next to the school where Amma was teaching.

They hardly had any utensils, leave alone an iron box, which was the last priority.  My Dad taught at the school in town and had to bus about 12 kilometer either way, thus had to leave early.  The first Sunday, he ironed the clothes required for my mother and him using an iron box which he borrowed from the home of a senior revenue official who lived across the street.  The next Sunday his request for the iron box was turned down claiming that it was under repair.  Next evening my father walked in with an iron box and that today lies in the attic of our ancestral house.

“What is the connection with this old iron box and the Priest,” I asked.

Amma took a long deep breath and said “This Priest is married to the daughter of that revenue official.“

Malayalis are people hailing from Kerala – The God’s Own Country -often called Mallus because the word Malayali is quite a tongue-twister and difficult to pronounce for many across the globe.  They speak Malayalam, a language spoken by more than 38 million people who live in the state of Kerala and Lakshadweep. Many in India refer to Mallus as Madrasis or even Malabaris, which any Mallu worth his name will despise.  You call him a ‘Thampi’ and he is sure to spit fire at you!

Malayalam, the eighth most spoken language in India, is believed to have originated from Thamizh, with a heavy influence of Sanskrit.  It became an independent language with its own script by AD 9th century.

There is a little known item of cloth that a Malayali is identified with.  It is not the Mundu or the Lungi; but a 5’x3′ white piece of cloth called Thorthu; a light bath towel,  which you will find in  every Malayali’s wardrobe.  We have a dozen of them in our Canadian home too.  It is universal – one size fits all; used by people of all ages, sex and religion.

Thorthu has a one-centimeter-thick border at both ends called Kara, which is generally black, blue or red.  This handy Indian cotton towel is known in North India as Gamcha, and in Thamizh Nadu as  Thundu.

The white coloured Thorthu has been around for generations. The warp and weft of this cloth is made of very fine cotton fibre.  These hand-woven towels are super absorbent, light weight, soft on skin, and quick drying.  In Kerala the relative humidity is around 70% through the year and any thick towel will take its own time to dry out.  Then there is the fear of fungus or mildew developing on a wet cloth.

A Mallu uses the Thorthu for rituals, journeys, pilgrimages, functions, traditional events, political rallies, etc.  It is all because the Thorthu takes up less space, can be washed easily with hands, and dries quickly.

In every Kerala household, the Thorthu has an important place, so did in our home too.  Our father always got the new Thorthu and dare not – no one could ever even touch it.  The next one was Amma’s and for all four sons, we had the older ones, but was always on first-come-first-served basis.  If one got late for the morning bath, he ended up with a wet Thorthu.

Though the primary use of a Thorthu is to dry one’s self after one’s bath, it has many uses left to the imagination of the user.

During this tough Covid time, I was in for a shock this evening – news of the demise of Colonel PV Ramakrishna, known amongst us – his friends – as Ramki.  He was from the  technical graduate entry and was commissioned to the Corps of Engineers with us on 24 December 1982.  He is survived by his daughters – Ms Neharika and Major Vimala. May the God Almighty give them the strength to bear the loss.

He was widowed soon after he hung his boots.  He then took to travelling across the globe and he landed at Toronto in August 2015 and stayed with us for ten days.  We explored the Niagara escarpment, the flower-pot islands, Toronto city, Montreal, Blue Mountains, African Lion Safari and so on.

As I write this eulogy, I’m still reeling from the tragic death of Ramki, we are shocked, scared and angered at the unfairness and senselessness of the Virus that took him from us. Well meaning people will tell us that it is all part of God’s plan, or that this was just Ramki’s time to go, that he is in a better place. While God certainly knows his plan, we do not. Unfortunately, there are no easy answers, and as difficult and painful as it is, we must accept that Ramki is with his Creator.

Ramki was a traveler and an adventurer. He was a person who loved to learn about and experience new places and other cultures. He carefully researched each of his journeys, , taking new and unexpected.

Ramki was an outstanding father who was very proud of his daughters and their achievements.  Whenever we spoke, he always had something to mention about both Neharika and Vimala.  He said in his last conversation with me last year to me “My greatest assets and treasures are my daughters and I have allowed them freedom to grow up to be worthwhile ladies and they have come out in flying colours always.  You have given much more freedom to your children and they will surely achieve greater heights.”

Rest in Peace Ramki – You can continue with your travel in the other world.

When I opened my Whatsapp this morning, I was in for a shock; a most unexpected one.  It was the untimely demise of Colonel Sandeep Dhawan due to Covid. May God give the family courage and fortitude to bear this irreplaceable loss.

Colonel Sandeep Dhawan was commissioned into 17 GRENADIERS on 24 Dec 1982, and commanded  battalion in the same regiment from 2002 to 2005. He also served a brief stint with 9n. He had served as a Staff Officer with the  Military Operations Directorate, Army Headquarters.  He was also an Instructor at Infantry School, Mhow and a United Nations Military Observer in Rwanda (UNAMIR) from 1995-96. He was Team leader of Indian Army Training Teams, Lesotho (Africa). He married  Anshu in May 1990 and has two daughters, Akarshita and Nikita.

“13651, Koduvath Reji, this is Sandeep, H/61,” was the salutary call I received three months back. I wasn’t surprised by Sandeep’s ability to recall all our National Defence Academy (NDA) identity numbers, even after 33 years.  He was a proud father calling me about his daughter Nikita’s application to University of Toronto for a PhD in machine learning.

I assured Sandeep all support from our end and answered many a query about Nikita’s stay in Toronto, including the financial aspects.  We discussed all options threadbare. Sandeep had done his homework well and was a man who went into every little aspect. I promised him a ‘firm base’ at our home for Nikita, where she can walk in freely, and also my availability 24/7 as I am often at home. This was the usual and expected support I always ensure to extend to all our coursemates, military friends and their children.

We  had three more tele-conversations, all about Nikita and her stay here in Canada. I researched her professor and told Sandeep he was a tough nut to crack, though I was unimpressed by his student evaluations.

In one such conversation, Sandeep recommended the book ‘Angela’s Ashes.’  I promptly ordered it and was delivered to me last evening by Amazon.  I never realised what was in store for me!!!!!

We had planned to meet up at Toronto this fall when he came to drop off Nikita.  All this time, I had no idea he would be saying goodbye to us so soon.  Rest In Peace Buddy.