Major Khushru Meherji Mistry, a Parsi from Bombay (now Mumbai) was my subordinate at 75 Medium Regiment.  He saw action in the Kashmir Valley for over a decade.

When Mistry joined our Regiment in 1988 as a young subaltern, my first question to him was whether he was related to Late Colonel KM Mistry, widely regarded as the first great Indian all-rounder and acclaimed by none other than the legendary Ranjitsinhji, who called him the ‘Clem Hill of India’.  In the 1894-95 Presidency fixture at Bombay, he showed what he was capable of with the ball as he recorded figures of 5/11 in the second innings to help the Parsis beat the shell-shocked Europeans – who were bowled out for just 24 – by 120 runs.  Second Lieutenant Mistry was a bit taken aback by my question but he confirmed that he was indeed his great-uncle.  Our journey together as soldiers began that day.

Recently, I came across this photograph of Lance Corporal William Kyle Carpenter who was awarded the United States’ highest military honor, the Medal of Honor.  His citation read “For conspicuous gallantry and intrepidity at the risk of his life above and beyond the call of duty while serving as an Automatic Rifleman with Company F, 2d Battalion, 9th Marines, in Helmand Province, Afghanistan in support of Operation Enduring Freedom on 21 November 2010. Lance Corporal Carpenter was a member of a platoon-sized coalition force. Lance Corporal Carpenter and a fellow Marine were manning a rooftop security position when the enemy initiated a daylight attack with hand grenades, one of which landed inside their sandbagged position. Without hesitation, and with complete disregard for his own safety, Lance Corporal Carpenter moved toward the grenade in an attempt to shield his fellow Marine from the deadly blast. When the grenade detonated, his body absorbed the brunt of the blast, severely wounding him, but saving the life of his fellow Marine. By his undaunted courage, bold fighting spirit, and unwavering devotion to duty in the face of almost certain death, Lance Corporal Carpenter reflected great credit upon himself and upheld the highest traditions of the Marine Corps and the United States Naval Service.”

Acts such as the one above fully illustrate the expression “raw courage” Thoughts of Mistry came before me on reading about Corporal Carpenter. It was another time and another Kyle Carpenter. Mistry was a professional soldier who loved the men who served under his command.  When we were serving in the valley in 1988, his helper, a soldier from Thamizh Nadu, reported that his mother was admitted to a hospital in a medical emergency and that he wanted to rush home.  The Srinagar-Jammu highway was closed due to heavy snowfall and landslides and the only way to reach Delhi was by air. Mistry immediately bought an air ticket for the soldier from Srinagar to Chennai from his own pocket and saw him off.  Yes, he was rich in a monetary sense but far richer at heart.

Mistry was a great orator with exceptional command over the English language.  His English language skills, he owed it to Rishi Valley School.  He was tough, bold, honest and straight forward. We took a spontaneous liking for each other maybe because of our open hearted nature.

On a summer morning in 1995, I got the news that Captain Mistry had been evacuated to the Army Hospital, New Delhi due to injuries suffered by him in a grenade attack. At the time he was serving with a Rashtriya Rifles (RR) Battalion in the Kashmir Valley.   A terrorist had lobbed a grenade in front of the section of men he was leading.  Mistry dived forward and scooped the grenade with his right hand.  The grenade burst mid-air, taking the top two elements of the three fingers of his right palm.

I rushed to the Hospital to look him up and I found a cheerful Mistry sitting in the Veranda of the officers’ ward, reading a book. I enquired as to what happened and he said “Let me explain to you in the very same words that I used to tell my mother about the incident, Like Mom prunes her Bonsai collection at home, God did a Bonsai on my Hand. By the way, I have already sent my motorbike for modification so that I can drive it with my Bonsai Hand.”

I was shell-shocked by his reply and we both really laughed it out.

After 30 minutes, while we were having a cup of tea at his bedside, a senior General walked in to meet Mistry to enquire about his welfare. The General commended Mistry stating that it was indeed a brave act which saved the men under his command. Mistry, as curt as he could be, replied “Sir, I did it to save myself.” The General gave a stare and walked off and with that evaporated any possibility of a citation for any award! Obviously, Mistry did not get any award or commendation for his brave act.

On 12 December 1997, while I was posted at Sikkim, Mistry re-joined our Regiment from another one.  He straight away moved into my room and left his belongings there.  In the evening I got my wisdom tooth extracted and due to anesthesia, went to bed early.  At about 8PM, while all officers were at the Officers’ Mess for dinner, my neighbouring room caught fire and in no time my room too was engulfed in fire.  Our exchange operator was the first to react and he took me out of my room.  Everyone assembled to put off the fire.  Mistry and I lost most of our belongings other than my computer and TV which our exchange operator managed to salvage.

Next morning as everyone was rummaging through what the fire had not managed to engulf, I hit upon a few currency notes of Rs100 denomination.  They appeared to have been forming a bundle.  I never had that money on me and my brain went into overdrive trying to fathom as to from where it came.  My take-home-salary then was much less than a wad of Rs100 currency notes.   Suddenly I realised that Mistry had left his belongings in my room.  I summoned Mistry to enquire and he nonchalantly replied that it was a bundle of notes which his mother had given him as a birthday gift before he left Bombay for Sikkim.  “My mother will send me another bundle if I say I lost it.  I am not going to tell her about the fire so that I don’t have to lie to her about her gift“

He passed away a decade later due to cardiac arrest. RIP my friend.

PS:  Have you noticed that both the heroes are ‘Carpenters‘; they share a common last name – the Indian ‘Mistry‘  translates to ‘Carpenter.’

Recently I came across a video clip about TWG’s Yellow Gold Bud Tea.  This tea is believed to have been once the favourite of Chinese emperors and as precious and costly as gold.  In fact, each tea bud is lavished in 24-karat gold, which once infused, yields a delicately metallic and floral aftertaste.

In the Sixties, during our childhood days, back home in Kottayam, the regular morning brew was coffee.  Ripened red coffee beans were plucked from the coffee trees that grew in our homestead and after being sun dried their outer covering was removed.  The beans were then fried until they turned black and ground to a powder at the nearby mill, to be stored in airtight containers. The coffee powder was put into a copper vessel with boiling water and was left for a few minutes for the coffee to be infused and the thick powder settled at the bottom of the copper vessel.  The extract or decoction was now mixed with milk and sugar and then served to all. Just thinking about it makes one salivate.

Happy change. I took to drinking tea on joining Sainik School, Amaravathinagar, Thamizh Nadu, at the age of nine in 1971.  Tea was served to us early in the morning prior to Physical Training, at 11 o’ Clock between classes and in the evening prior to games.  Every cadet took a liking to this tea as everyone looked forward to it.  For many it served as a clock as none of us wore a wristwatch.  The tea had some magic in it as it had the innate quality to kick start all the important events in a cadet’s life! 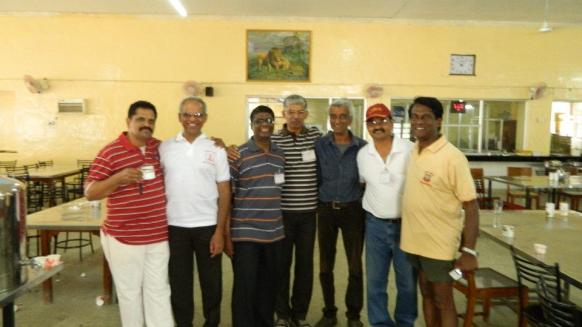 What was so special about this magical concoction?  The taste of this tea is beyond words, and could never be replicated.  We tried hard to analyse the secret of this addictive tea. What was special about it? It could be the special blend of the tea leaves or the way in which it was cured. Or perhaps it was the sublime effect of the Amaravathi River waters, the vessel in which it was brewed, or the cloth used to filter it – the possibilities were endless.  It remains a mystery to all of us, but it attracts most alumni to the school every year and they gleefully indulge in consuming steaming cups of this divine tea. Some Cadets even claimed that it was made with donkey’s milk.

Another most memorable cup of tea that I have had was the tea served by soldiers at the Sadhna Post at Nastachun Pass.  This pass is located at about 10,000 feet Above Sea Level at the entrance to the Thangdhar Valley on the Indo-Pak border.  The narrow one-way road from Chowkibal (about 100 km from Srinagar) was cut along the mountains to Nastachun Pass and then down into Thangdhar Valley.  The road being narrow could only accommodate one vehicle either way.  To ensure a smooth flow of vehicles, all traffic was regulated by a convoy system. The up and down convoys left from Thandhar and Chowkibal at about 8 in the morning and 2 in the Afternoon respectively.  The vehicles on reaching Nastachun Pass parked there, awaiting all vehicles to fetch up from either side.

During this wait, soldiers manning Sadhna Post served tea to all.  It was real refreshing cup of tea as one was both physically and mentally tired traversing up through the treacherous roads with many hairpin bends. It was a magic potion that invigorated tired limbs and ebbing spirits.

During winter, the road and the mountains got covered with over ten feet of snow.  The only way to cross over was by foot columns.  The foot columns operated at night, two days after a heavy snowstorm to avoid avalanches.  The foot column consisted mainly of soldiers proceeding or returning from leave from their homes, porters carrying essential supplies – fresh vegetables and milk, mail, etc.

It took about four hours of strenuous climb to Sadhna Post and was a sure test of anyone’s mental and physical abilities. It was a kind of surreal experience.  On reaching Sadhna Post, everyone was welcomed by the soldiers with a hot ‘cuppa,’ a cup of tea that was the most refreshing and tasty – it simply was the best . To my mind, it could very well be compared to Amrit – the nectar of immortality in Hindu mythology. The climb down from the Sadhna post appeared easier but was just as treacherous, if not more, due to the tendency to slip and fall.

I have never tasted the Yellow Gold Bud Tea, the specialty of the Chinese emperors. But I am certain that it will pale into insignificance when compared with the Amravathi Special or the Sadhna Post Amrit!