The first Field Firing Exercise that I participated in as a Gun Position Officer (GPO) – Second Lieutenant – was on 28 December 1983.  It was a Battery level exercise for 753 Medium Battery.  Our Battery Commander was Major Ashok Sikka, with Captain Firoze Allavalli as his Second-in-Command.  Captain Avinash Chandra was attached to our battery as the Observation Post officer from the Regimental Headquarters.  We had four 130mm Russian Medium Guns and the exercise was to practice engagement of targets and fire planning at the Thughlakabad Field Firing Ranges.

The Thughlakabad Ranges was located South-West of Qutab Minar, North-West of Faridabad and South-East of Gurgaon.  The range was closed down in 1988 as it posed hazards to the aircrafts landing at the Indira Gandhi International Airport close by and also because the area around it was being developed into residential colonies.

On 28 December we carried out tactical manoeuvres of the battery in the area around Gurgaon (then it was hardly developed as one sees it today) and by evening deployed in the Field Firing Ranges.  By dusk, we practiced engagement of targets with live firing up to 8PM.

At the end of the shooting, I received a message from Major Sikka that a team of about 100 people, mainly press photographers and reporters from various print media houses, and the camera crew from Doordarshan (India’s national TV broadcaster) were scheduled to visit us in the gun area by 10AM on 29 December.  They were to witness the firing of medium guns.  Major Sikka also instructed me to ensure that they were well cared for as per the norms of our battery. 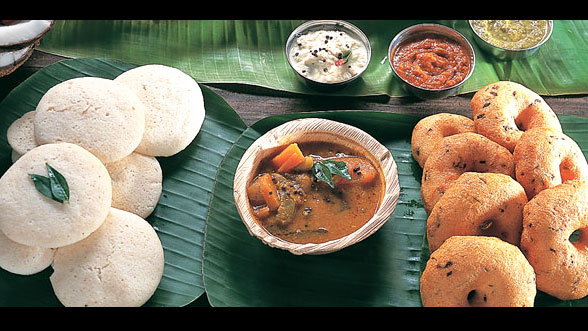 Subedar (Warrant Officer) Chinnappa was in charge of the administration of the gun area and I immediately summoned him.  I asked Subedar Chinnappa as to how he intended to take care of the visitors and without winking an eyelid he said “We will serve them Idli (four to five inches in diameter cake made by steaming a batter of fermented de-husked black lentils and rice), Vada (spicy doughnut shaped deep fried snack made from black grams and Bengal grams), Sambar (spicy a lentil-based vegetable stew ) and Chutney (side dish made using  a combination of coconut, garlic, ginger, tamarind, chili,  cumin and fenugreek.)

I was surprised with Subedar Chinnappa’s answer as I knew that fermenting the batter for Idli overnight in the cold winter of Delhi was near impossible, but Subedar Chinnappa seemed pretty confident of executing it.  I summoned all the soldiers and explained to them about the impending visit by press reporters next day and instructed all of them to be smartly turned out and answer all the queries with confidence.

Now I summoned my ‘Commando Team’.  This team consisted of the Limber Gunners from the gun detachments – Naik (Corporal) Achuthan (very good at cooking, better than any chef), Naik Sengole, Naik Prasannan and Naik Mathukutty – and the Machine Gun Operator – Naik Gopalakrishna Pillai and driver Naik Venson.  The Limber Gunner of a detachment is generally the Deputy to the Detachment Commander, one skilled in the basics of the Gunners’ trade, more especially in the care and maintenance of the gun and its ammunition.    They all sported terrorising handlebar moustaches (Major Sikka had a liking for it), including Subedar Chinnappa, which would send tremors up the spine of even Veerappan, the forest brigand.  They were ever ready to execute any ‘difficult’ task at any time and used many ingenious methods to achieve excellent results.

The task in hand was explained to them and they held a mini-conference among them to decide on the plan of action.  Around 8:30 PM they drove to the Regimental location to grind the lentils and rice for the barter.  They returned to the gun area by about 2 AM with the batter.

I still was trying to work out in my mind the difficult proposition of fermenting the batter in a cold night.  It requires around 25 degrees Celsius temperature for fermentation and I had only eight hours in hand.  Neither Subedar Chinnappa nor my Commando Team appeared least worried about it.  They asked me to sleep for a few hours as I had to conduct the firing in the morning and also brief the visitors.  They assured me not to worry about the Idli-Vada problem.

The press team consisting of about 100 people arrived at the gun area at stroke of 10 and Subdear Chinnappa with his characteristic smile received them and escorted them to the gun position.  He had ensured that the members of the commando team were by then positioned around my command post.

I welcomed the visitors and before I could commence the briefing, a senior press reporter remarked that he was impressed with the turnout and smartness of the soldiers, especially their moustaches.  Everyone in the crowd nodded and some added a few words of approval.  Subedar Chinnappa won the first round and I glanced at him with a smile of appreciation.

Firing of guns was demonstrated and everyone took photographs and the camera crew recorded the events.  They interacted with the soldiers at the guns and at the command post and were briefed well by everyone.  By around 11 o’ clock, Subedar Chinnappa invited everyone for a cup of tea.  They were surprised to see Idli-Vada being served in the jungles and were really appreciative of the snacks.  They wanted to know as to how we made it.  Many of them went on to remark that they never had eaten such soft and tasty Idli-Vada in their life.

Before bidding goodbye, the news producer of Doordarshan was really appreciative of the Idli-Vada and said that I must watch the 9 PM newscast as this event would be part of the headlines.  The print media reporters said that the photographs and the news report would find a place on the front pages.  I did not take them that seriously and saw them off.

Now I summoned the Commando Team to appreciate them for their special efforts.  I was curious to know as to how they fermented the batter.  Naik Venson was responsible for this task and he took the Team to the Regiment location in the Gun Tower – the Kraz vehicle.  Kraz being of Russian origin has driver-cabin heating system.  When they returned with the batter to the gun area, the Kraz’s cabin was already at about 25 degrees Celsius.  Naik Venson kept the Kraz in static run mode till next morning.  This ensured that the cabin temperature remained at optimum level for the batter to ferment.  What an idea Sir-ji.

After the firing exercise, I returned to the Officers’ Mess by evening.  I asked for a drink and sat in the TV room.  In those days we had only the Doordarshan channel and the news headlines said “75 Medium Regiment conducted their field firing exercise today” and the visuals of the firing practice were shown.  Next morning all the leading dailies published from Delhi carried the same news item with a photograph in their front page.  The photographs and news reports were placed in the Regimental History Book.

So, the Idli-Vada did play a vital role in impressing the media persons. The story is a testimony to the versatile ingenuity of the soldiers of the Indian Army.

Front page report that appeared on the Indian Express

18 thoughts on “Idli-Vada At Thughlakabad Ranges”