“Can you hear me at the back?”  Queried the Reviewing Officer at the Passing Out Parade of our nephew, prior to commencing his address to the Cadets.  There was a seven second utter silence that followed – as if those seven seconds did not exist in this world for everyone gathered out there.

Did the Reviewing Officer not trust the Commandant of the Academy, a General Officer, who invited him to be the Reviewing Officer?  Would everyone at the Academy have not put their best foot forward to ensure successful conduct of the most important and venerated event at the Academy?  As Cadets during our own Passing out Parade in the past, haven’t we all seen the Herculean efforts put in by everyone, especially the team responsible for the PA system, to ensure that each word spoken is audible at every nook and corner of the Parade Ground and beyond? 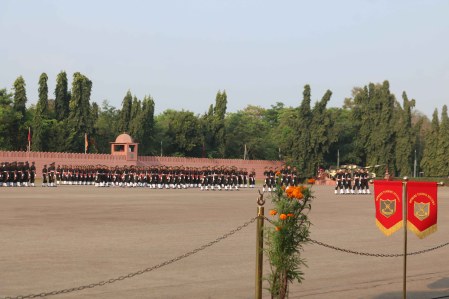 What if the address was not audible to the Cadets? Would it make a huge difference? No. They would have already been bored to death with the surfeit of advices from all and sundry.  I do not remember a single word of the address by the Reviewing Officer at our Passing Out Parade, though the Reviewing Officer was the most charismatic of them all, Field Marshal Sam Manekshaw.  So would be the fate of any lesser mortal here and now. Senior military officers could sometimes do well without recourse to ‘out of place clichés’.

My mind flashed back to my military service days.  Once a month in military service, it was the day of the ‘Sainik Sammelan’ (Address to Soldiers of the Regiment by the Commanding Officer (CO)), a monthly ritual, mostly held on the last Saturday of the month.  During my Regimental service, I observed that a Sergeant responsible for the PA System set it up well before everyone assembled, tested it by tapping his fingers on the microphone and saying “Testing, Testing, Testing.”

Once the Regimental Sergeant Major assembled all the soldiers, he also tested the PA System by tapping his fingers on the microphone and saying “Testing, Testing, Testing.”  After that the Sergeant Major gave his report to the Subedar Major (Master Warrant Officer.)  The Adjutant then received the report from the Subedar Major who then handed over the parade to the Second-in-Command (2IC).  At every stage of reporting, no one seemed to trust the poor PA system and everyone tested its functionality.

Now came the auspicious moment of the arrival of the CO.  The 2IC gave  the report to the CO and the CO settled down on the dais.  As the CO was about to commence his speech, the PA system sabotaged itself and gave out a most shrill and unholy tone “Koooooooooooo  Thap” and refused to do its job. Pure and simple system generated retribution for the lack of faith!!

Sainik Sammelans have been an event for the CO to demonstrate his oratory skills.  Some COs believed that they could communicate all their ‘accumulated wisdom’ on to their captive audience during the Sainik Sammelan and often in such cases, it extended to several hours.  In effect there was no transmission/reception of wisdom, but it ended up with sore bottoms, numb feet and a few caricatures of the CO by the officers.

Captain Desh Raj was the self appointed commander for all young officers (Lieutenants and Captains) of our Regiment. One day, after the CO’s Regimental Sainik Sammelan, Captain Desh Raj summoned all of us, five young officers of the Regiment, and directed us to show him our note pads where we had noted down the points briefed by our Commanding Officer.  All of us, except one, were reluctant to display our pads.  We were all trying to hide our note pads, but Captain Desh Raj successfully managed to snatch them from us and glanced through them.  Soon thereafter he declared “None of you can make a good caricature of our CO.  Your artistic skills need to be toned up.  Look at my note pad and the next time I want to see a better caricature of our Commanding Officer from you all than this masterpiece of mine.”

That was when I realised that all those serious note taking by all young officers were much the same and on similar lines to what Captain Desh Raj did!  When I became a Battery Commander and later a CO, I ensured that all my Sainik Sammelans were of less than ten-minute duration. Possibly, I was mortally scared of my subordinates drawing my caricature! So I resolved not to give them time for the act.

Whether the PA system is working or not, there is no need to raise the question “Can you hear me at the back?”  Every speaker must realise that nothing much can be done at the nick of time other than the speaker straining his vocal cords to make the speech audible to all.  It only shows lack of trust in the organisation or the person who invited you to speak. Above all, a routine and meaningless cliché that is best avoided!!