We took Guillaume Le Floch, the French exchange student to visit the Canadian Parliament building at Ottawa in August 2014. During the tour we entered the Memorial Chamber in the Peace Tower. The Memorial Chamber is a small, quiet room that houses seven Books of Remembrance which record the names of the men and women who have given their lives in military service to Canada. The Memorial Chamber is a beautifully crafted room with a vaulted ceiling, stained glass windows and intricate carvings depicting Canada’s record of war.

These books contain the names of more than 118,000 Canadians who fought in wars and died either during or after them. These men and women made the ultimate sacrifice while serving the country in uniform. The Government of Canada has always been in the forefront in honouring the men and women in uniform. The seven Books of Remembrance ensures that their names are etched in the history of the country and are always well preserved and cared for.

These Books of Remembrance represent the highest expressions of modern workmanship and artistry. The craftsmanship, heraldic illumination, calligraphy, water coloring, bookbinding and leather tooling give the books a special look and quality unequalled the world over. 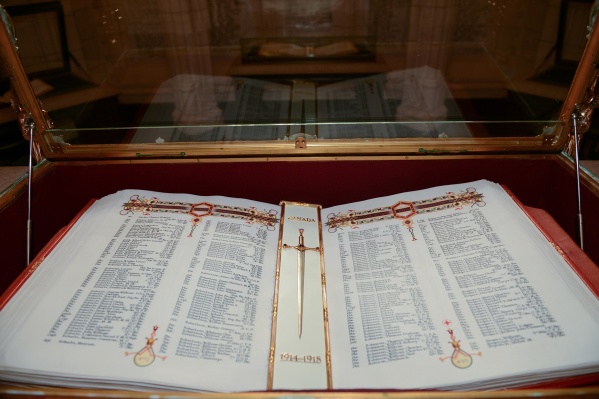 The first book is the largest of the Books, containing 66,655 names, of those who died in is the First World War. The second book contains 44,893 names of those who did the extreme sacrifice in the Second World War. The third is the Korean War Book of Remembrance which commemorates the 516 men and women who died during the Korean War from 1950 to 1953.

The fourth book is the South African War/Nile Expedition Book of Remembrance, containing names of nearly 300 Canadian volunteers, who gave their lives in these early campaigns in the late 1800s This book was commissioned on May 31, 1962, the anniversary of the signing of the Peace of Vereeniging, which ended the war in South Africa.

The fifth is the Merchant Navy Book of Remembrance which commemorates the men and women of the Merchant Marine who died while serving Canada at sea during both World War I and II. 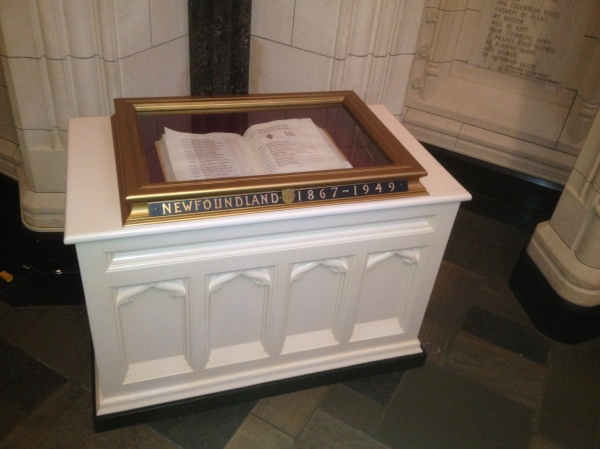 The sixth is the New Foundland Book of Remembrance which honours more than 2300 men and women who sacrificed their lives in both World War I and World War II, before Newfoundland became a Canadian province in 1949.

The seventh is the In Service of Canada Book of Remembrance This book records the names of those who died since October 1947 in military service to Canada (except in the Korean War), either in Canada or abroad.

On July 1, 1917 , then Prime Minister Sir Robert Borden dedicated a site in the Centre Block of the Houses of Parliament as a memorial to the debt of our forefathers and to the valour of those Canadians who fought in the First World War. Two years later the Prince of Wales laid the corner stone of “The Tower of Victory and Peace” as it was originally known. The intention was for all the names of the Canadian soldiers to be engraved on the walls of the chamber, but it was soon realized that there would not be enough space on the walls to contain more than 66,000 names.

Thus resulted the Book of Remembrance and the design of the Tower was altered to create a chamber to accommodate the Books. The Prince of Wales on August 3, 1927 unveiled the altar; a gift from the British Government, upon which the Book of The First World War rests this day.

James Purves was the artist chosen for the creation of the first book. James Purves died in 1940, at which time only the preliminary work had been done and only one page was fully illuminated and illustrated. Alan Beddoe, an assistant of Purves, took over and completed the book in 1942. By the time the first book was completed, Canada was already in the middle of the Second World War. Today this book lies open on the Altar in the centre of the Memorial Chamber, covered by a glass case and with kneeling statuettes of praying angels at its corners.

In 1948, Beddoe was selected to create the Book of Remembrance for the Second World War. He changed the script style and included approximately 75 names per page as compared to 125 names per page in the First World War Book. He also incorporated many pages commemorating particular actions, battles, and places that were significant to Canadians during the war. The Second World War Book of Remembrance was placed in the Memorial Chamber on Remembrance Day of 1957 (November 11).

The names of those lost are inscribed in the Korean War Book of Remembrance, which includes a page decorated with the United Nations symbol surrounded by the Arms of the 17 countries which participated in the United Nations Forces. The Book was dedicated in the Memorial Chamber on November 11, 1962.

The Nile Expedition in 1884 marked the first time Canada took part in a war overseas. Four hundred volunteers skilled in river navigation served in the expedition; sixteen gave their lives. The South African War broke out on October 11, 1899. This war marked the first occasion in which large contingents of Canadian troops served abroad. More than 7,000 Canadians volunteered to fight in the South African War. Almost 300 names are listed in the South African War / Nile Expedition Book of Remembrance. The Book was dedicated and placed in the Memorial Chamber on May 31, 1962, the sixtieth anniversary of the signing of the Peace of Vereeniging, which ended the war in South Africa.

Every morning, at eleven o’clock, the pages of the Books of Remembrance are turned by a member of the House of Commons Protective Service Staff. A calendar was devised so that each page of each book is turned once a year. Some pages are left exposed for several days at a time on or near a date of the anniversary of the actions they commemorate. During the ceremony a guard in marches in front of the First World War Book, bows and salutes and then marches over to the book on the right and turn the page. This process is repeated for all of the Books of Remembrance and is done in a counter-clockwise direction around the Chamber.

The seven Books of Remembrance are testaments to the valour, sacrifice and selflessness of those Canadians who have died in military service. Any country that honours its soldiers will always go a long way ahead as Canada has proved.

3 thoughts on “The Seven Books of Remembrance”