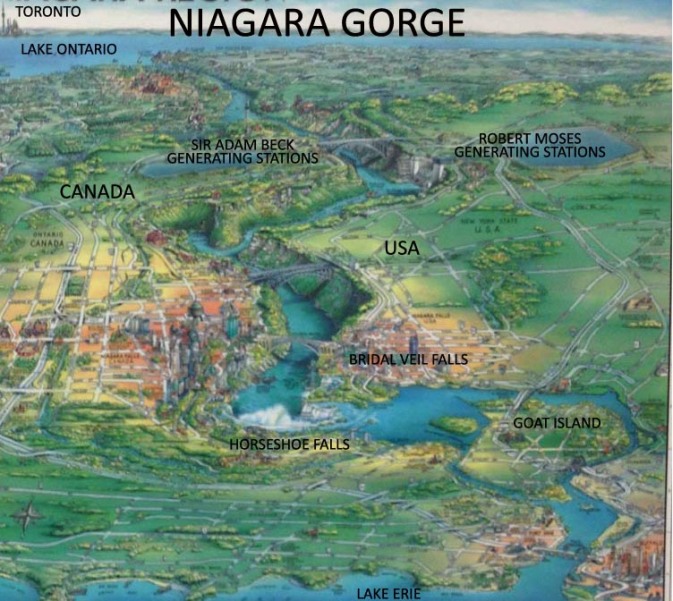 Visitors to Niagara Falls, a geographic wonder, located at the border of Canada and US, generally view the falls and return without going into its geology and the natural history behind its formation. On the Halloween of 2015 (To read more about Halloween CLICK HERE), we had Mrs Lalitha Goerge (wife of Late Colonel Raju George, Regiment of Artillery)) and their son, Major Shona George, visiting us and I took them to view the Niagara Gorge, prior to viewing the falls.

Niagara Falls is the aggregate name for three waterfalls that structure the Southern end of the Niagara Gorge. The first person to see and describe Niagara Falls was Father Louis Hennepin, a French priest in 1678. Niagara Falls is over 12,000 years old and were formed at the end of the last Ice Age, when the melting glaciers formed the Great Lakes. Water from Lake Erie at an elevation of 175 meters above sea level, flowed downhill towards Lake Ontario which is at an elevation of 75 meters. While the water rushed from one lake to another, the Niagara River, about 58 kilometers in length; a natural outlet from Lake Erie to Lake Ontario, was carved out. At one point, the river had to rush over a large cliff (the Niagara Escarpment). As the falls eroded over time, the Niagara Gorge of about 11 km  from where the falls were initially formed.

The river formed the gorge, and the Falls has receded upstream and South toward Lake Erie, by slow erosion of hard rock on the surface rock of the escarpment and the relatively soft layers beneath it. The force of the river current in the gorge is one of the most powerful in the world. Due to the dangers this presents, kayaking the gorge has generally been prohibited.

The water that flows over Niagara Falls is greenish-blue and sometimes, after storms, which stir up dirt at the bottom of the river and the Great Lakes, the water briefly turns brown. An estimated 60 tons of dissolved minerals are swept over Niagara Falls every minute. The greenish-blue colour comes from the dissolved salts and ‘rock flour,’ very finely ground rock, picked up primarily from the limestone bed and also from the soft rock beneath it. 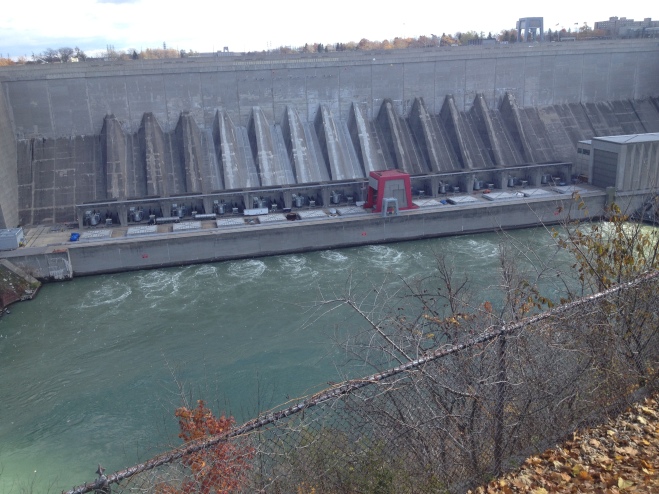 On the American side of the border is the Robert Moses Niagara Power Plant and the Lewiston Pump Generating Plant, together generate more than 2400 mega Watts of electricity.

The falls still continue to erode, however, the rate has been greatly reduced due to flow control and diversion for hydro-power generation. Recession for at least the last 600 years has been estimated at 1 to 1.5 meters per year. Its current rate of erosion is estimated at 1 foot per year and could possibly be reduced to 1 foot per 10 years. Erosive forces include the action of frost from the spray, the dissolving action of the spray itself, and abrasion action of the softer shales by fallen limestone boulders.

The Great Lakes in general are very sensitive to high-or-low precipitation years, and this can affect the flow from Lake Erie into the Niagara River.  However the levels have been regulated by the International Joint Commission (USA and Canada) since 1910.

The basis for determining the amount of water that can be diverted for power generation is contained in the ‘1950 Niagara Treaty.’ The treaty requires that during the daylight hours of the tourist season (0800 to 2200 hours local time, April 01 to September 15 and 0800 to 2000 hours local time September 16 to October 31), the flow over Niagara Falls must not be less than 2832 cubic meters per second (cubic m/s). At all other times, the flow must not be less than 1416 cu m/s.

From biggest to littlest, the three waterfalls that form the Niagara Falls are the Horseshoe Falls, the American Falls and the Bridal Veil Falls. 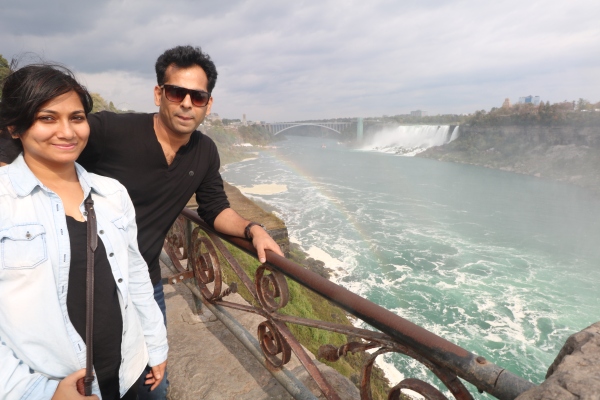 A boat ride through the gorge to the Horseshoe falls (May through October) is indeed an unforgettable experience for everyone. 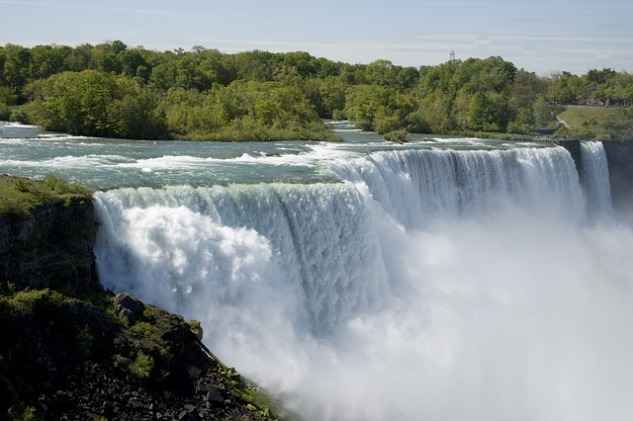 The greatest threat to the integrity of the Horseshoe Falls and the American Falls is rock falls. The American Falls has been the victim of many rock falls in the past. As the rock boulders collect at the base, it reduces the distance of the water fall and creates more of a cascade effect.  On July 24, 1954,  a huge section of rock collapsed at the brink of the American Falls, sending about 185,000 tons of rock into the Niagara River Gorge.  Later, many controlled blasts were carried out to remove the fallen boulders beneath the American Falls.

What happens to the Niagara Falls during the freezing Canadian Winters? 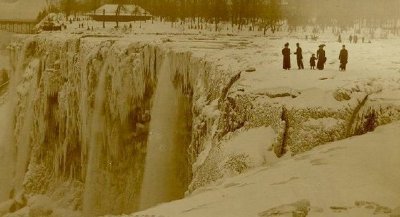 Usually in January, after a heavy snowfall, the strong southwest wind breaks up the ice on Lake Erie and sends it down the Niagara River and over the Falls. The wet ice forced up out of the water below the Falls freezes into a huge mass, growing into a structure of considerable size and strength, called an Ice Bridge.   In the 1890s, visitors to the Falls would often venture out on the ice bridge and many vendors would even set up stalls to sell refreshments. Since a tragic event in 1912, when the ice suddenly broke up and two tourists were killed, going out on the ice bridge has been strictly prohibited.

During the severely cold frigid winter days, the falls do appear to be frozen, but the water never actually stops flowing underneath.  The Niagara River being an important source of hydro power, a long ice boom made of steel catches any icebergs, while ice breaker boats work around the clock to prevent the falls from jamming up.

On 29 March 1848, Niagara had stopped for thirty hours. The river bed dried up and those who were brave enough, walked or rode horses over the rock floor of the channel. Then, with a roar, Niagara was back in business. This phenomenon was due to high winds that set the ice fields of Lake Erie in motion and tons of ice got lodged at the source of the river, blocking the channel completely, until finally a shift in the forces of nature released it and the pent up weight of water broke through. 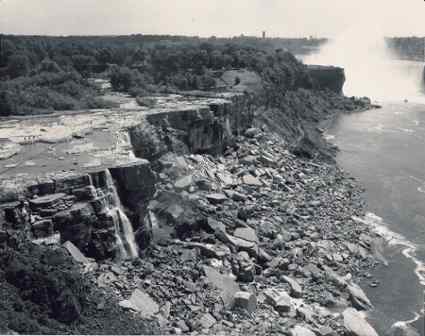 The flow over the American Falls was stopped completely for several months in 1969. The idea was to determine the feasibility of removing the large amount of loose rock from the base of the falls to enhance its appearance.  Visitors from near and far traveled to see this once in a lifetime experience. On one side of the Falls only a trickle of water would flow over the brink, while the Horseshoe Falls were flowing stronger than ever.  The project was abandoned seeing the high cost it involved.

The future of Niagara Falls is not easily predicted. The Falls of Niagara as we know it today will remain as it is for thousands of years to come. Erosion is the largest factor which will alter its appearance in the future. Some have estimated that the Falls would continue eroding Southward for the next 8,000 years at which time it would reach the limits of Lake Erie.

Perhaps the most realistic outlook is that the Falls will continue to erode Southward. There is no doubt that at some point in its future that the main Horseshoe Falls once it has eroded far enough South, will cut off the water flow to the American Falls. The Falls of Niagara will once again become one.