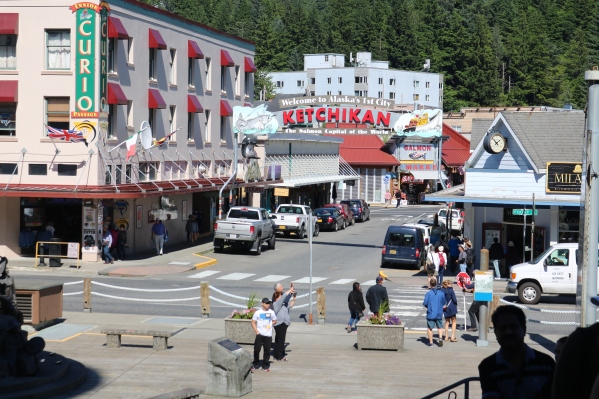 Our ship reached Ketchikan Port in the early hours 03 August.  After breakfast, we disembarked and walked to the Great Alaskan Lumberjack Show arena.

The term ‘lumberjack’ is a Canadian derivation and are workers in logging industry who perform  initial harvesting and transportation of trees. The term usually refers to a bygone era when hand tools were used in harvesting trees. The lumberjack’s work was difficult, dangerous, intermittent, low-paying, and they lived in makeshift cabins and tents. However, these men built a traditional culture that celebrated strength, masculinity and  confrontation with danger. Lumberjacks, exclusively men, worked in lumber camps and often lived a migratory life, following timber harvesting jobs as they opened. Their common equipment were axe and cross-cut saw.

In popular culture, a stereotypical lumberjack is a strong, burly, usually bearded man who lives to brave the natural environment. He is depicted wearing suspenders, a long-sleeved plaid flannel shirt, and heavy caulk boots.  With a rugged group of expert lumberjacks, some razor sharp equipment, and a mix of corny jokes, a hour long exhibition of logging events was worth watching. Great Alaskan Lumberjack Show featured a page right out of history with old fashion axe swinging and lumbering skills. 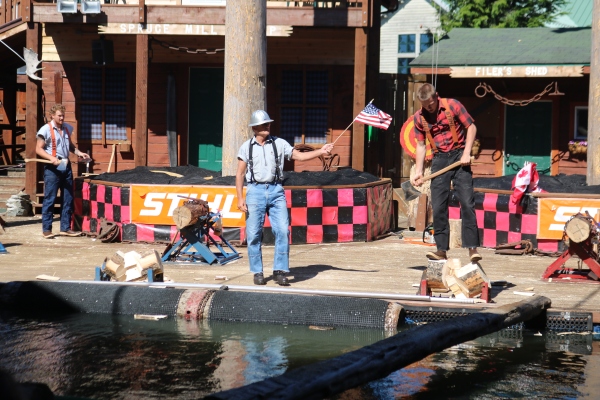 Great Alaskan Lumberjack Show is the re-enactment of how lumberjacks competed and displayed their skills.  There was a rivalry between Dawson Creek Mill in British Columbia, Canada and  Spruce Mill in Alaska, USA.  Both camps claimed they produced better timber and their lumberjacks were more skillful.  To stake their claims, they held an annual Lumberjack Competition and the winners won bragging rights.  Arena where we watched the Lumberjack Show was the very same place where  Spruce Mill was functioning.  The show began and it was a hysterical, hand clapping and foot pounding spectacle as the audience were also divided into two sides supporting each team –  Canadian and American.

First event was Underhand Chop while standing on a log.  It required the lumberjack to swing an axe fractions of an inch from his feet, mimicking how early lumberjacks would cut fallen logs to length in the forests.  It needed immense skill and control of the axe as margin of error was very narrow.  The axe had to move vertically up and down, else would land on the lumberjack’s foot.

This was followed by the Standing Block Chop.  To a casual observer, standing block chop may resemble a baseball swing.  It involves swinging a razor sharp axe at a 11 inch thick pine chopping block. It was surely more than just smashing on a log with brute muscle power.  The lumberjack had to ensure that the axe met the log at the correct angle to cut the wood fibers and slice into the block.

Next event was the Springboard Chop.  The lumberjacks had to severe a log placed about nine feet high.  In the earlier days springboards used to allow lumberjacks a flat working surface in uneven terrain or where tall trees were cut by hand in steep hills.  The lumberjacks started by cutting a small pocket with an axe at roughly hip level for the first springboard, then jumped onto the first board before cutting another pocket higher up the pole.  Then they placed the second board into this hole and jumped on it, providing a secure location to chop the log.   Standing on this springboard, they chopped and severed the block. 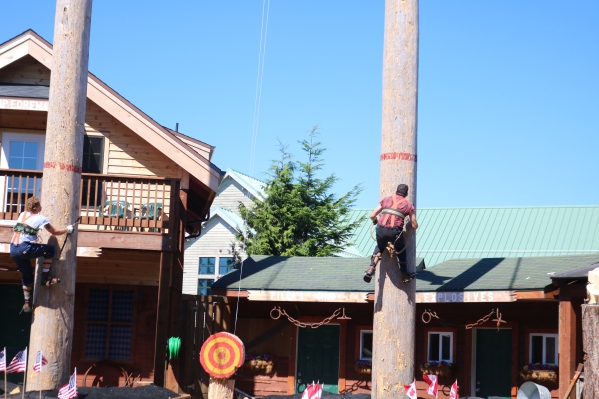 Next competition was the 60-feet Speed Climb where in the lumberjacks climbed a 60-feet-tall cedar pole using steel-core climbing ropes  and spurs and then came down slithering. While descending, the lumberjacks had to touch the pole once every 15 feet.

This was followed by Double Buck Sawing where two sawyers working as a team with a two-man bucking saw had to cut through a 20-inch-diameter pine log.

Next event was Axe throwing where the lumberjacks threw an axe at a target, attempting to hit the bulls eye as near as possible in the allowed five throws for a maximum score of 25. The target was a three feet diameter circle, consisting of five rings  four inches wide. Scoring was based on where the axe struck with the outside ring worth one point, the next one in worth two, then three, then four and finally the bulls eye worth five points. Distance of the throwing line to the target was 21 feet.  In case the thrower stepped over the throwing line, or the axe did not lodge correctly on the target,  he got no points. 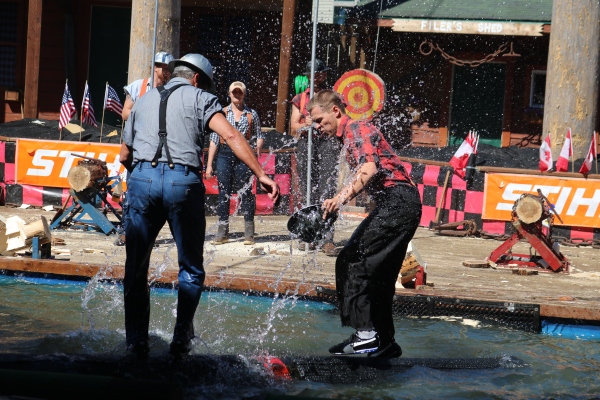 Final event was Logrolling, also known as Birling.  Two lumberjacks from opposing teams stepped onto a floating log and started  the roll and spin it rapidly in water with their feet.  They would  stop it suddenly by digging into the log with special caulked birling shoes and a reverse motion to maneuver their adversary off balance and into water, a feat called ‘wetting’. Dislodging an opponent constituted a fall.

The Lumberjack Show reflected upon North America’s rich logging history and came to life with thrilling displays of strength and agility. The show in fact honours an industry that was the backbone of Ketchikan’s economy from the late 50s to the 80s.

Next : Ketchikan – City of Totem Poles and Salmon

2 thoughts on “Ketchikan – The First City of Alaska”