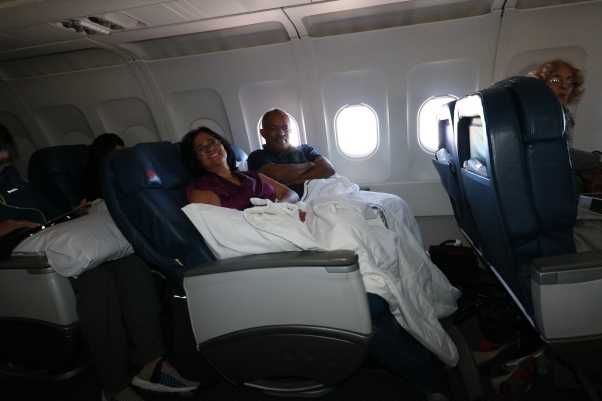 During our recent trip to Alaska, we flew from Toronto to Vancouver.  We boarded the early morning Air Canada flight from Toronto.  The flight duration was of about five hours, but the clock only moved by two hours because the clock had to be set back by three hours as the time zone of Vancouver is three hours behind Toronto.

The five hours flight was made more comfortable than the regular one as the aircraft, an Airbus 319 variant deployed was the special charter plane used to fly various teams of the National Hockey League (NHL).  The aircraft had only 58 seats, that too all First Class, with all the accessories like comforters, extra legroom, LCD screens, and a private jet-like experience.  Thank you Air Canada.  They neither charge us any premium nor extra for the additional comfort and services rendered on our Economy Class ticket.

Former India cricket captain Kapil Dev has suggested the Board of Control for Cricket in India (BCCI) to buy an airplane for the Indian cricket team in order to reduce travel time and resulting fatigue in an already busy schedule. He had made a similar suggestion to the BCCI a few years ago too.  With the T20 Indian Premier League (IPL) also going great guns, BCCI is surely making good money.  By owning a plane, could be in partnership with any of the leading carriers, it is sure to save a lot of time and make life easier for Team India and also for various IPL teams.

In the middle of the aircraft were four seats on either side with a large table.  Surely, it must be for the team management, the captain, the coach, the physio to hold any meetings in flight to work out strategy for the next game or to evaluate the team’s performance in their previous game.

With a busy schedule ahead, both at home and at international locations, Team India is in for spending a lot of time in air.  The effect of jetlag travelling across the globe takes a fair share of energy that too sitting in a cramped position, especially after playing a physically and mentally tiring match.  Why, even the practice sessions of today takes the toll.

It could also be feasible for various IPL teams to own their own aircrafts in collaboration with various domestic carriers.  The aircraft could be used on the domestic circuit when the IPL is not in session.  It will surely be a great draw with the cricket crazy Indian public, to be sitting on a seat usually occupied by their cricketing hero.  Obviously, such seats will go at a premium.  The aircraft can also be chartered for corporate events, tourism packages, pilgrimage and also for weddings.

It would not only generate extra mullah for the airline, but would also help in with their publicity.

Kapil Dev’s suggestion must be taken up by BCCI  and all the IPL franchisees, at least to make  the players enjoy a better and comfortable flight in future.

2 thoughts on “Special Aircraft for the Indian Cricket Team”