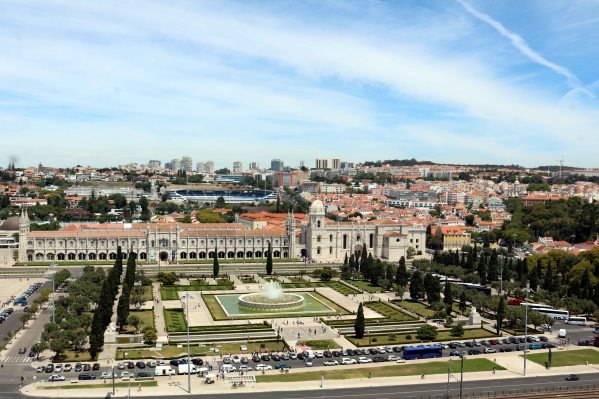 On the morning of June 22 we decided to explore the Tagus River front of Lisbon.  We walked to the Vasco da Gama Garden on the Northern bank of Tagus River. The garden is a lovely green space situated in one of the noble areas of cosmopolitan Lisbon.  The garden features a wave-shaped lake on the lower level of the garden and a fountain with waterspouts.

The most prominent landmark visible from the garden is the 25th April Bridge, the longest suspension bridge in Europe. The 2277 meter long bridge has two levels, the top level with six lanes is for cars and the lower, which was added in 1999 carries double electrified railway tracks.  The bridge was inaugurated on 06 August 1966 and was named Salazar Bridge, after António de Oliveira Salazar, dictator of Portugal until 1974. After the Carnation Revolution that took place on 25 April 1974, Salazar’s regime was overturned, the Bridge was named 25th April Bridge.

On the Southern bank of the river is the municipality of Almada and there stands Cristo Rei, one of Lisbon’s most iconic monuments. This statue depicts Christ with open arms raised, blessing the city.  Its construction commenced in 1950 in reverence for Portugal being saved from the horrors of World War II.  Lisbon’s Cristo Rei has many similarities to the Christ the Redeemer statue in Rio, and the Brazilian statue was the original inspiration.

In the centre of the garden stands the Monument to the Discoveries, originally built for the 1940 World Exhibition.  It commemorates the achievements of explorers during the Age of Discoveries and the creation of Portugal’s empire.  The monument was only built as a temporary structure and it was demolished a couple of years after the closure of the exhibition.  The monument of today is an exact replica of the original one. It was built in 1960 on the occasion of the 500th anniversary of Henry the Navigator’s death.  Henry the Navigator was a driving force behind the overseas exploration and he financed many of the Portuguese expeditions.

The fifty meter tall monument, shaped like a ship’s bow, stands where in 1493 a storm forced Christopher Columbus to anchor here on his way back to Spain after his discovery of the Americas and in1497 Vasco da Gama embarked on his voyage to India.  The monument has thirty-three statues of people who played an important role in the Portuguese Age of Discovery.  Each statue is designed to show movement towards the front (the unknown sea), projecting a direct or indirect synthesis of their participation in the events after Henry the Navigator.

At the tip of the bow stands Henry the Navigator holding a model of a Caravel.  The Caravel was a small, highly manoeuvrable sailing ship developed in the 15th century by the Portuguese to explore along the West African coast and into the Atlantic Ocean.

On the port side of the ship, behind Henry are King Afonso V who supported the exploration and colonization of Africa  and the explorers Afonso Baldaia who explored the coast of Western Sahara, Vasco da Gama, Pedro Álvares Cabral (discoverer of Brazil) and Ferdinand Magellan (the first explorer to circumnavigate the world). They are followed by navigators, writers, missionaries, a mathematician, a cartographer and other figures from the era of the discoveries.

On the starboard side, Henry is followed by Prince Fernando, brother of Henry, and explorers João Gonçalves Zarco who established settlements on the Madeira Islands, in the Atlantic Ocean, South-West of Portugal.  They are followed by a Queen, a writer, a poet, a painter,  chroniclers and pilots of Caravels.

We entered the monument, and purchased the entry tickets.  The monument houses a museum, exhibition halls and other rooms spread over seven floors.  An elevator leads to the rooftop, but I climbed to the rooftop through the stairs.  The rooftop offered a stunning view of the city and Tagus River.

At the foot of the Monument to the Discoveries is a giant 14 meter wide marble wind rose embedded in the pavement – the Mappa Mundi – a gift from South Africa in 1960.  A map of the world at the center of the wind rose charts the Portuguese explorations.  The map shows the most important dates in the history of the discoveries and ships mark the locations where Portuguese explorers first set foot on land.

I was more interested in the exploration of India.  Calicut (Kozhikode), Goa and Daman find a place on the map so is Ceylon (Sri Lanka).  Portuguese led by Vasco da Gama were the first to land at Kozhikode, sailing from Europe, circumventing the Cape of Good Hope in search of spices.  I was fascinated more by the spellings of various places on this map. 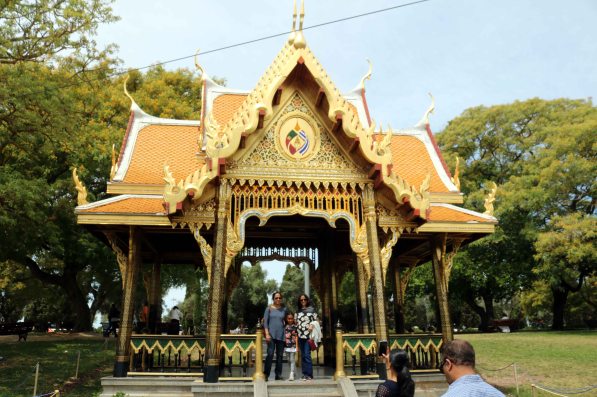 We climbed down the stairs of the Monument to the Discoveries and walked to the East end of the Vasco da Gama Garden where the Japanese Festival was being held.  The Portuguese were the first Europeans to arrive in Japan in 1543.  Now more than 400 years past that first sparkle of friendship, this event is held in June to celebrate the friendship between two countries and their cultures.  This annual festival is organised by the Japanese embassy and Japanese Trading Commission among others.

After lunch, we continued with our explorations of the city of Lisbon.

2 thoughts on “Discovering the City of Discoverers”