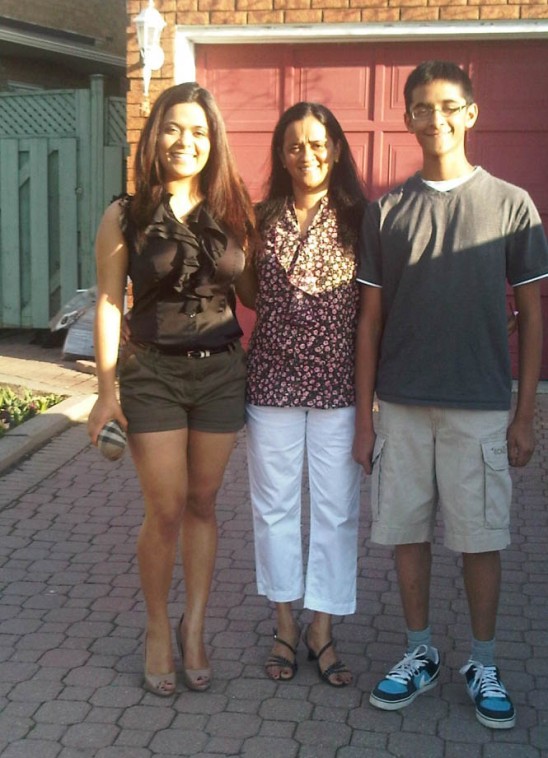 We got married in 1989 and Marina, my wife was then on the third year of her Pharmacy degree at Gulbarga, Karnataka.  I was then undergoing the Long Gunnery Staff Course (LGSC) for a year at Devlali. She always came over to Devlali, whenever she could manage a few days off, often travelling in trains without reservations. That used to be a monthly affair and I think the entire course knew when she came over as I invariably managed to skip classes on those days.

In those days there were no cell phones and mind you, no (Subscriber Trunk Dialling) STD or long distance dialling facilities too at Devlali. One had to wait for 9 PM as thereafter the rates came down to a quarter, else it was expensive to make a long distance calls then. Whenever I thought I missed her, I used to sit outside the Telephone office, next to the railway station, book a call to the ladies hostel at Gulbarga and wait for the call to materialise. It used to take an hour for sure and the wait many a times seemed much longer, especially with the mosquitoes buzzing into one’s ears; their bites I did not seem to mind too much (created by the almighty, perhaps they too had a right to live), but never their music. At times there was some company.  A Young Officer trying to call up his girl friend/ fiancé or another officer missing his wife who had gone home for a few days, may be for a marriage in the family or to look up her parents.

Marina was the University topper and after completing her B Pharm degree, we got into ‘family’ life and Marina enjoyed the army wife’s life for a few years. Once the initial fun was over after getting too used to the army life, over the years she got really fed up with it. She found that the wives of many senior officers real dumb who had no interests other than making a career for their husbands.

One day, she decided that she had had enough and said “What use is my B Pharm Degree, for which I slogged for four years?” That is, after eight years of marriage and Army life, she decided to leave me and move to Delhi and try her hand at a business. The business, a joint venture with another Army lady, did not go the way Marina wanted and hence she applied for immigration to Canada.

After applying for immigration, she left the business to her partner and joined a Pharmacy College in Delhi to teach. The main aim was to get back to the subject proper, which she had not been in touch with for last eight years. That was when I got posted to Delhi.

She got the books for the licensing exam for a Pharmacist in Canada from her sister who lives in the US. And thus began her battle with the books all over again and I must say she slogged her way out. She got her Canadian Visa as a permanent resident in February 2002 and at that time, coincidentally I was posted overnight to take over command of a Surveillance and Target Acquisition Regiment in the field during Operation Parakram.

A decision was made – to splinter the family- our son Nikhil, an LKG student, off to my parents in Kerala; our daughter Nidhi Grade 5 student to stay at Delhi with Brigadier GM Sankar, our family friend, until her final examinations in March and then off to Kerala; myself to Rajasthan and Marina to Canada, that too in February when the winter is at its worst in Canada. There was no other option and it had to happen and we simply had to cope.

After the operational deployment, our unit returned to Devlali in November 2002. Our children moved in with me and I became a single parent Commanding Officer.  By then I had established myself well in the unit.  All officers and soldiers were outstanding individuals with a lot of self-confidence in them.  They understood their tasks pretty well and executed them with finesse.  The unit was indeed a well-oiled machine.  Late Colonel Suresh Babu was the Second-in-Command, who along with other officers ran the Regiment exceptionally well. Our Regiment was clearly the best outfit in town.

Soon thereafter, I was in for a shock as Nikhil, then in Kindergarten, came back to me speaking only Malayalam as he lived in Kerala for six months.  He had completely forgotten Hindi and English, which he spoke very fluently while at Delhi and his brains were now reformatted in Malayalam.  It took a month and some special effort from me and the unit staff to teach him Hindi and English.

On landing in Canada, Marina worked eight hours a day and studied 10 hours a day and in a year cleared all the licensing exams in one go. A herculean effort. There are two written and a practical examination to be cleared and only about 5% of international pharmacy graduates clear it.

After two years of her landing in Canada, Marina obtained her license as a pharmacist after completing her studentship (four months) and internship (six months). Children joined her in March 2004. I bid farewell to arms six months later and moved to Canada in September 2004. Thus began the reunion of a splintered family. What began as a stray thought in Marina’s mind had eventually developed into a passionate endeavour resulting in a cataclysmic change for each member of the family. Are we happy today as a family?  Mostly, it’s an emphatic YES. But sometimes we do miss our people, Kerala and above all the Indian Army environs.

At that time I asked Marina as to how she managed to pass all her licensing exams in a year when most people take a minimum of three years and many up to six. She said it was all hard work as she wanted to get me and children as fast as possible to Canada. Being alone in Canada facilitated her to put in those extra hours of hard work. Further, as she was an Army Wife, she was tough and ready to take on all challenges.  She said she was lucky that she never worked as a pharmacist in India and hence did not learn the ‘wrong’ things.  Thus  no unlearning was required prior to learning the Canadian way of pharmacy management. In her view, she started her studies as if she had not even done her B Pharm and hence could clear all the exams in one go.