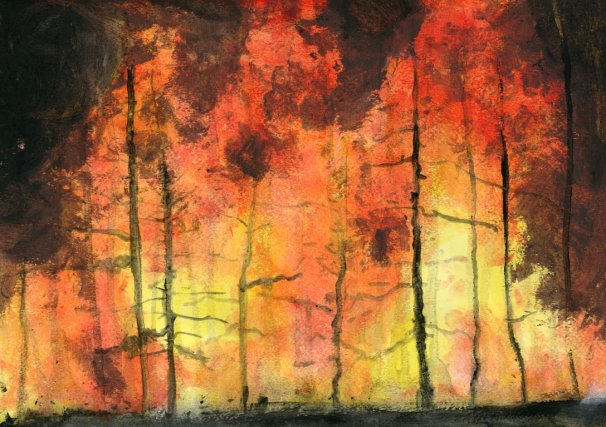 Enormous flames are no longer consuming the city of Fort McMurray, but the wildfire is still active and classified as ‘out of control’ by the Alberta government.  The wildfire travelled 25 to 30 km East and as of 03 May afternoon, it covered about 2300 square kilometres of boreal coniferous forests.  The wildfire of Fort McMurray was christened ‘Beast’ by the firefighters.

The main reason the fire got bigger is that the main Fort McMurray fire merged with a much smaller, separate fire that had been burning to the North-East.  The fire grew due to the favourable weather conditions of heat, dryness and wind.  The firefighters were in the lookout for less windy days, rain, cooler temperatures and more humidity in the air in order to bring the wildfire under control.

Flames were only visible at the front of the large active wildfire, and he rest was ‘fields of just black ash’ left behind.  That huge burnt area is extremely dangerous and firefighters have months of work ahead of them.  They are carrying out infrared scans from the air to find ‘hot spots’ where smoke continues to smoulder underground.

About 700 firefighters were working on the Fort McMurray wildfire.  Twenty-six helicopters were being used to transport crews and to pick up and drop water.  13 air tanker planes (water bombers) were carrying water or fire retardant.  It is estimated that there is a total of 1,547 firefighters, 121 helicopters and 28 water bombers battling 25 wildfires across Alberta right now.

Most of those fires are classified as ‘under control.’  Only the Fort McMurray wildfire remained ‘out of control.’

Displaced Fort McMurray residents are getting more resources to help ease their predicament. The Canadian government says it will work to speed up employment insurance claims; Canada Post has announced a mail forwarding program free of charge for Fort McMurray and area residents; and Western Union is waiving money-transfer fees so Canadians can send money to Alberta more easily. Many retailers, pharmacists and others are offering services for those in need.

The evacuation of over 80,000 residents was carried out in an orderly manner.  Police officers helped re-fuel vehicles and generous residents offered these families a place to stay for the night.  The bright lights of RCMP cruisers helped the drivers to remain on road, while above, Canadian Forces helicopters searched for any signs of danger to the fleeing traffic.  There was also a massive airlift of more than 16,000 people.  Wildfire evacuees were mainly accommodated at the University of Alberta residences.

Cooler temperatures, higher moisture in the air and lighter winds helped efforts to suppress the fire.   The fire was moving away from Fort McMurray in a South-East direction and unlikely to be a threat as the area is mainly wild land and away from habitation.

An average of 1,200 wildfires are reported in Alberta each year, and half of those fires are caused by humans, according to the National Fire Database.  Lightning is the second-leading cause with 47 per cent.  The fire’s proximity to the city, as well as data that shows that there were no lightning strikes in the area, directly leads to the inference that the cause of the fire was most likely human.

Weather is a crucial enabler of wildfires.  In the days before the wildfire, the weather in Fort McMurray was unseasonably warm, with strong winds and lack of rains.  All combined, it was the ideal scenario for a small fire to grow and spread.  The high temperatures were part of a year-long pattern attributed to El Nino, a periodic warming of waters in the East-Central Pacific Ocean that was at its strongest in recent months since 1997-98.

With summer-like temperatures and continuing tinder-dry conditions, the Alberta Province has banned the use of off-highway vehicles on public lands and provincial parks.  Flying of helicams and drones is banned as it may cause hindrance to the many fire-fighting aircrafts operating in the area.  A province-wide fire ban is in effect.  All open fires, including campfires and charcoal briquettes are prohibited.

In the fight against climate change, forests play a critical role — drawing more greenhouse gases out of the atmosphere than they emit.  But when they burn, much of those stored gases are released back into the atmosphere.  For 6,000 years boreal forests have operated on a cycle of growth, fire, and re-growth.  It will take at least a decade before the forests destroyed by the fires in Fort McMurray are storing more carbon than they are releasing.

Such big wildfires affect plant succession and result in rejuvenation of the process of the maturation of plant systems.  Plant succession refers to changes in vegetation in a specific area over a period of time and is dependent on factors like disasters, changing conditions or human activity. While area of wildlife will adjust to these changes over time, the fire would have been catastrophic to most animals in the area.  The bears and the wolves are going to be destroyed in the first instance but it won’t be long for them to be back in the system

Within one to three years, bears are actually likely to benefit from the fires as there would be a good chance of massive berry crops like blueberries emerging, allowing bears to return and do quite well. Wolves’ success would depend on species like moose and deer that are found in the early stages of the evolution of the forest. 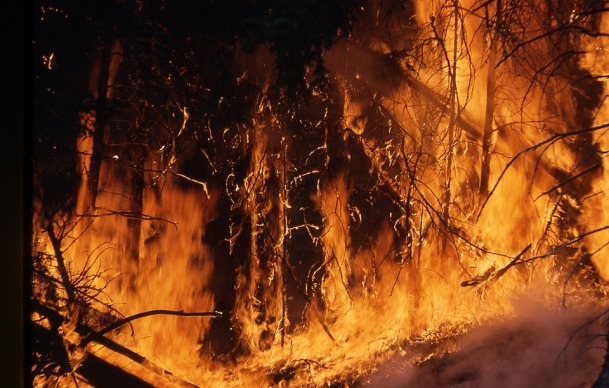 Forest fires are a natural phenomenon, and are beneficial ecologically, returning valuable nutrients to the soil that helps a natural rebirth.  Such fires naturally occur in forests every 150 to 250 years.  With changing global weather patterns, the scientist fear that the frequency of wildfires occurring may even reduce to 50 years.

At least nine major oil companies, including Syncrude and Suncor, suspended operations after the wildfire broke out, leaving Alberta’s oil production down by more than a million barrels per day – half of the province’s daily output and one third of Canada’s.  8,000 oilsands workers were evacuated on 16 May as the fire was approaching the oil production facilities.  The fire is not expected to create much havoc as these facilities have some fire treatment in place that will hopefully prevent them seeing too much impact from the fire.

The Russian President Vladimir Putin offered the services of IL-76 water bombers, capable of dumping 42 tons of fire retardant into fire spots.  Canada, however, turned down the offer.  The most difficult part of fighting a forest fire is coordinating smoky skies filled with low-flying helicopters and water bombers.  It is why, over the past few years often the only fatalities in major fires have been due to air crashes.  It would be difficult for the Russian pilots to communicate with the Canadian English speaking firefighters on ground, pilots operating in the area and air effort coordinators.

A pilot died in 2011 when his firefighting helicopter crashed, and another pilot died in 2015 in a water-bomber crash while fighting a wildfires in Alberta. However, there have been no civilian fatalities because of a forest fire since 1938.

Fort McMurray has been sealed off for days, for other than those involved in the firefighting efforts.  Media persons accompanied the Alberta Premier Rachel Notley on her first visit to the area on 09 May; six days after the area was evacuated.  The Canadian Prime Minister Justin Trudeau, visited the area to compliment the firefighters for their efforts to combat the fire only on 13 May.  The PM was of the opinion that when firefighters were busy trying to contain a massive raging wildfire, it is not a helpful thing for him to pay a visit.  Such visits would cause a drain on the firefighting resources and would only prove to be a hindrance.  Are other world leaders listening?

There were many rumours taking round about the wildfire.  A post in Facebook claimed “Eco-Terrorism suspected in Fort McMurray fire.”  The next was of an arsonist setting the fire.   This rumour actually attracted RCMP attention and asked firefighters in the area to keep on guard for lone wanderers. The mysterious fires that prompted the rumour were later found to be flaring up hotspots, a common phenomenon in forest fires.  Also, Fort McMurray is a remote city now populated almost exclusively by police, utility workers and firefighters just waiting to get their hands on a suspected arsonist.  The website ConservativeFans.com ran with the recklessly unsourced allegation that a man with purported ISIL connections had taken responsibility for the fire.

While the full extent of the damage isn’t yet known, we certainly do know that, for those who have been affected by this fire, it is absolutely devastating. It is a loss on a scale that is hard for many of us to imagine.  The biggest lesson learned for any community in preparing for disaster, is to have connections and know the people.  There is a need for everyone to be familiar with the disaster plan in their area and have an emergency bag packed.  The stronger the community is beforehand the better they are going to do after in the recovery.

More than 80,000 residents of Fort McMurray, its entire population, are now entering their third week away from home with no word on when they may be able to return.

Thomas Graham is a young artist from Mississauga, Canada.  He after graduating from Grade 12 in June 2015, is selected to join the prestigious Ontario College of Art and Design (OCAD) University, Toronto, to pursue a degree in illustration and is looking to become an illustrator by profession.

3 thoughts on “Beast – The Wild Fire”