In the morning of 31 July after breakfast we played cards in the Card Room as the ship cruised its way into Glacier Bay.  Glacier Bay National Park and Preserve contains some of the world’s most impressive tidewater glaciers. The bay has experienced at least four major glacial advances and four major retreats and serves as an outdoor research laboratory.  Glacier Bay has more than 50 named glaciers, as well as two major arms: East Arm and West Arm. The cruise ships head up the West Arm, towards the Margerie Glacier as it is the most impressive glacier, which is advancing three to four meter a day and calves frequently. 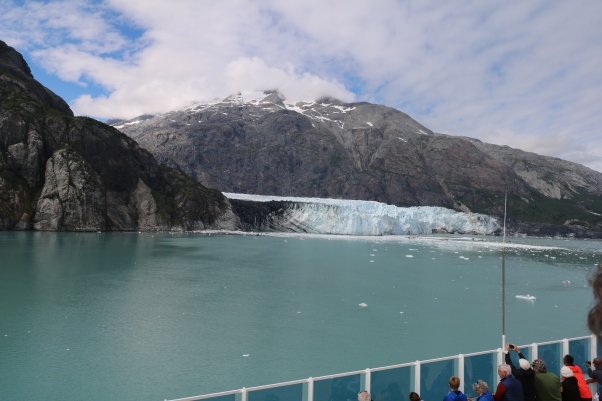 The glaciers in Glacier Bay are remnants of a general ice advance—the Little Ice Age—that began about 4,000 years ago. This advance is not comparable to continental glaciation that occurred during the Wisconsin Ice Age.  By about 1750, Little Ice Age reached its maximum stage and a general recession of glaciers began.  200 years ago Glacier Bay was covered by Grand Pacific Glacier, which was more than 1,200 meter thick and about 30 km wide. Since then the ice has been retreating with Glacier Bay  now having 20 separate glaciers, of which 11 are tidewater glaciers including Margerie Glacier that calve into the bay.

Margerie Glacier is named after French geologist and geographer Emmanuel de Margerie who visited the area in 1913.  Glacier Bay was completely covered by ice in 1794 when Captain George Vancouver, a British officer of the Royal Navy, best known for his expedition which explored and charted North America’s North-Western Pacific Coast region was stopped by a wall of ice 32 km wide and 1,200 m high.  This ice wall has since retreated from the mouth of the bay and is only a remnant of the massive glacier seen by Vancouver.   Today, the ice flows have been recorded at Margerie Glacier at 610 meter per year or about 1.75 meter per day.

Like a river, the glacier flows down the mountain  choosing the path of least resistance. As it moves,  it swallows rocks into its lower layers. These  acquired rocks grind away at the bedrock, carving deep valleys in the  mountainside over the years.

When the ice reaches lower, warmer elevations, it begins to melt. Eventually the loss through melting is greater than the supply of ice flowing down the  mountain. Now the glacier ceases to make further  progress, though the body of ice is still moving  down the mountains.  The length of time it takes for a snowflake that falls in the mountains to emerge at the end, or terminus of a glacier varies, depending on the speed at which the glacier is flowing. The ice visible at the face of the park’s glaciers today  is about 200 years old.

As we entered the Glacier Bay we first sighted the South Marble Island. This small island is a  sunbathing spot of gigantic Sea Lions. They lay on the rocks  with the dominant males sitting with their back arched and head erect.

Then came up the ‘Gloomy Knob’, a well rounded, dome shaped granite feature.  Surely it would have been smoothened by the glacial activities over the years.  Grass growing on the rocks formed a grazing pasture for the Mountain Goats. 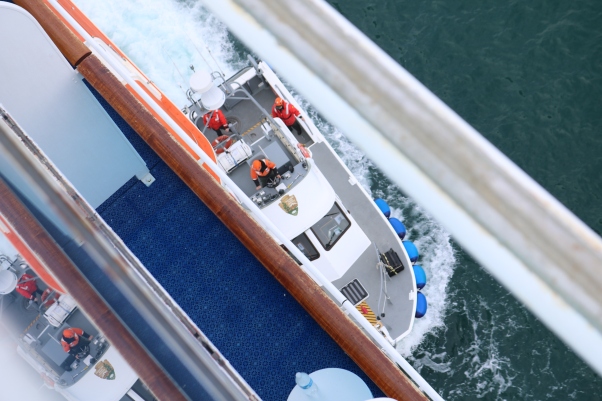 After we passed Gloomy Knob, a boat belonging to US National Park Services came alongside our ship.  Rangers from the boat boarded our ship through a rope-ladders provided by the ship’s crew.

These Rangers, lead by Ms Highsmith, the Warden,  conducted classes about the Glacier Bay, its ecology, geology, about the original inhabitants, etc.  She brought out as to how the current conservation effort has been a great success as they included local inhabitants into it, respecting their beliefs, traditions and customs.

Our ship then moved closer to the Margerie Glacier, nearly a mile away, to facilitate us to view the spectacle of calving.  Cows have calves, glaciers calve icebergs, which are chunks of ice that break off glaciers and fall into water. This is caused in the glaciers of the Glacier Bay due to the forward motion of the glacier and the erosive action of the salt water of the Pacific Ocean, the tidal waves and the wind.

As we stood on the deck watching the Margerie Glacier, it calved five times, each time bringing down a heavy volume of ice, falling into water with a thunderous sound.  It was a great natural spectacle showcasing the fury of nature. 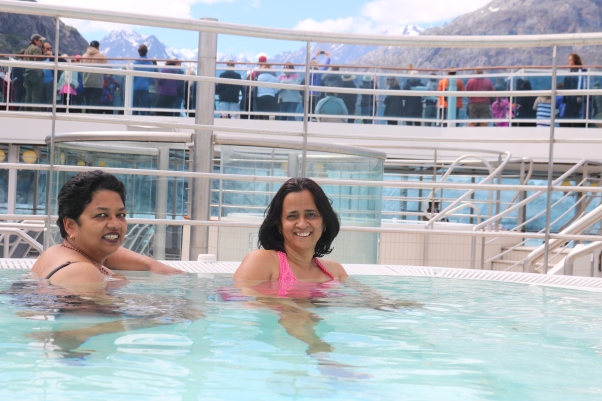 As our ship steamed off from the Glacier Bay, we all enjoyed a swim in the top deck swimming pool.

Next : Skagway – Gateway to the Klondike Gold Rush