St Mary’s Church in Manarcaudu village, the village adjacent to ours, celebrates the feast of the Nativity of Virgin Mary on September 8. The first eight days of September   are observed as Eight Day Lent by the devotees. This occasion attracts thousands of pilgrims from all religions, Hindus, Muslims and Christians. 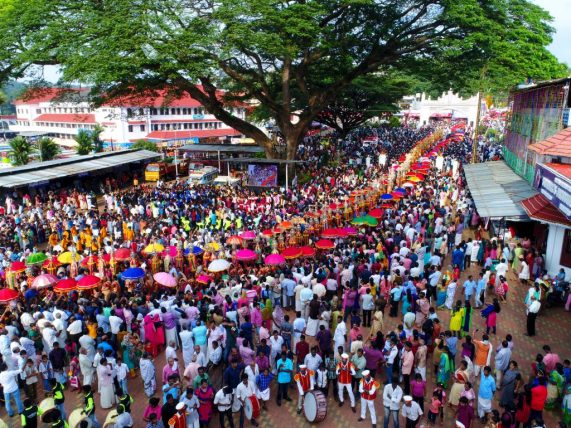 On the sixth day of the Lent, a historic procession called Raaza is taken out.  The Raaza is accompanied by traditional drums of Kerala – Chendamelam and caparisoned elephants.  Thousands of devotees from far and wide participate in the celebrations, carrying Muthukkuda (Royal Umbrellas), lavishly decorated umbrellas with silk parasols and silver crosses.

On the seventh day of the Lent, the ceremony of Nada Thurakkal (opening of the sanctum sanctorum) is held.  This enables the devotees to have Darshan (Holy Viewing) and venerate the Holy portrait of holy Mother Mary with child Jesus in her hand.  Such ‘darshan’ of the portrait is then closed after a week.

On the eight day of the Lent, Pachor (a sweet dish made from rice, milk and jaggery), prepared by the church, is offered to all devotees.  In the evening of the eight- day lent, the culmination of the festival is marked  by a spectacular display of fireworks. After the fireworks, parish members perform traditional art forms like Margam Kali –  a group dance  by women – and Parichamuttu Kali –  a martial dance by men – with songs  tracing their origins to the evangelistic activity of St Thomas.

A granite cross known as Kalkurisu (Stone Cross) is located at the rear side of the church.  Lighting candles around this stone cross is an important ritual in this church.  Many  of the devotees who come to the church to take part in the Eight Day Lent, after taking a ritual bath, roll themselves on the ground around the cross and light candles there.  It is believed to have a miraculous cure.

There are two ponds next to the church, one on the northern side for women and on the western side for men.  Taking bath in these ponds is believed to have miraculous healing powers.

In the centre of the hall of the Church burns the Kedavilakku (the eternal lamp or lamp that is never put out).

The rituals, the structural architecture, traditions and customs, all point to the natural amalgamation Indian Hindu culture with the Christian belief that the Syrian Christians of Kerala follow.  Christianity in Kerala is believed to have been established by St Thomas, a disciple of Christ, in the first century.

About 400 meters from the St Mary’s Church is the Sri Bhagavathy (Goddess) Temple.  According to local folklore, St Mary and the Bhagavathy are sisters.  At the temple’s annual festival, the priests carry the Goddess around the village on top of an elephant to receive offerings from the people. The Goddess on this journey stops at the Church to meet her sister Mother Mary.  When the Goddess arrives at the church to meet her sister, the congregation of the church receive the Goddess and makes a donation to the temple – money and a tin of oil for the temple lamps.

The devotees coming to Manarcaudu, the Hindus pray at the church and the Christians at the Temple for the blessings of Mother Mary and the Bhagavathy.  They believe that the pilgrimage is incomplete without a visit to both the sisters.