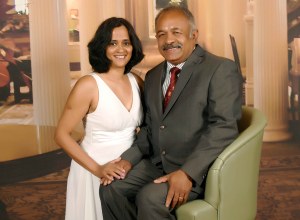 In 1993, I met with an accident fracturing my right arm, resulting in my right arm being put in a cast for three months.  At that time, I was posted as a Brigade Major at an artillery brigade headquarters.  I owned a Yamaha Rajdoot Motorcycle then.  The accident resulted in the motorcycle resting in a corner of our garage.

A few weeks into this sedentary state of my motorcycle, Marina, very nonchalantly asked me whether she could ride it.  She until then was riding her moped and I never took her question very seriously.  I casually explained to her the gears, clutch, brake, accelerator etc and also the methodology to start and ride the motorcycle.

Speed in general and other activities that cause an adrenaline rush were an integral part of Marina’s DNA. She had migrated to Canada in 2002 and the family followed suit in 2004.  While on a family vacation to San Francisco in 2006, Marina was booked by the cops for driving at 100 miles per hour (mph) on a 65 mph highway.  With the consequent heavy fine she had to pay and a steep rise in the insurance premium, I thought she had come to terms with her obsession for speed.

During our vacation to Chicago, Illinois, in 2009, Marina went Skydiving (in tandem) from 18,000 feet, a freefall of a minute and a half.  The advantage of skydiving in the State of Illinois is that it is not mandatory to wear a helmet (even on motorcycles), but the safety goggles is a must to protect the eyes. Thus the videos come out much better without the helmet on.

She had to prove my heavy fine hypothesis wrong when in 2010 she expressed her long cherished dream to own a motorcycle.  I tried to dissuade her saying that motorcycles are not cheap and would cost a small fortune, much more than our cars.   They require more maintenance and insurance is much more expensive. Also, you can drive it only for six months in Canada.  In addition, we also need to procure very expensive associated gear such as helmet, jacket, pants, gloves and footwear over and above the purchase of the bike.

Unable to convince her, I was out with the ultimate weapon, statistics. I warned her that according to the U.S. National Highway Traffic Safety Administration, your chances of dying on a motorcycle are 35 times higher than in a car!  Canadian Medical Association Journal says that motorcycles are the cause of 10% of motor vehicle deaths in the country, even though they only make up 2% of what’s on the road.

Her pharmacist friends and her elder sister who too is a pharmacist advised her that riding a bike to work may not be befitting a Pharmacy Manager and possibly look very unprofessional.

All sane advice from well wishers and yours truly, did not deter her a wee bit from her avowed intention to own and ride a motorcycle. Throwing all caution to the winds, she went ahead and passed the eye test and written examination and obtained M1 licence – the first step to riding a bike in Canada.

The next step was to buy a motorcycle.  To ride on a Canadian Highway where the speed limit is 100 kmph, a bike with an engine capacity of at least 250cc to 400cc is needed.  We visited all motorcycle showrooms from Harley Davidson to Honda – but much to her great disappointment, no one was willing to sell Marina a motorcycle.  But Why?

In Canada, in order to buy a motorcycle, the buyer must sit on the bike with both feet flat on the ground while comfortably holding the handlebars.

They all agreed to sell her a smaller motorcycle – 100cc to 150cc which can be taken only on city streets – but she would not settle for not riding on the highways. And why would they not allow a light motorcycle on the highways?   While driving on Canadian highways with a speed limit of about 100 kmph, the motorcyclists need to share the road with sixty feet long commercial trucks which are also is cruising at about 100 kmph.  Due to various factors such as air pressure and airflow, a large vehicle can create heavy air turbulence. In case your motorcycle is not heavy and powerful enough, this turbulence may affect your ability to control your vehicle when passing a large one.

Well, that was the end of her motorcycle ambitions. Or was it? Perhaps, like a dreaded virus, it lies dormant in some corner of her brain to re-emerge at some opportune moment in a not too distant a future!