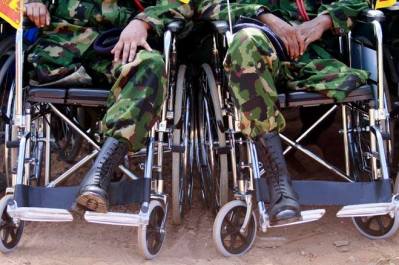 Recently the social media was abuzz with the news of Indian soldiers’ pension being cut by 50% for those seeking voluntary retirement after 20 years of service.  One suggested methodology is to follow the Canadian Armed Forces Pension scheme.  Canadian Armed Forces Pay scales are second only to the Australian.

It is a well established fact that the Armed Forces have a steep pyramidcal structure – more at the officers level – and also at the soldiers level.  The need is to have a young and large base – Lieutenants, Captains and Majors  for officers and Privates for soldiers.

Canadian Armed Forces offers 50% pension on completion of 10 years of service.  Officers who continue further are only put through command and staff courses and they rise up to command battalions/ regiments. This results in:-

Among those invalidated out or those who sought voluntary retirement due to medical disabilities, about 40 per cent  were for mental health, about half of those were diagnosed as  post-traumatic stress disorder (PTSD).

Most Indian Army soldiers and officers do suffer from PTSD due to intense combat situations they face – Canadian Armed Forces hardly face any such situation. Luckily the military echelons never accepted the existence of PTSD in the Indian Army – hence no claimants for disability pension.

Canadian Veterans who qualify for disability benefits receive up to 75 per cent of the salary they were earning when they left the Forces. They are guaranteed benefits for 24 months initially, or until age 65 for those completely disabled, after which the Canadian Pension Plan (CPP) kicks in.

The rise of mental health claims is often chalked up to Canada’s difficult 2002-11 combat mission in Afghanistan.  The Treasury Board of Canada Secretariat (TBCS) noted that the Afghanistan mission was  far from the only source of mental health risks. Even at home in Canada, military service means moving often and spending time on duty far from family – a standard practise for most Indian soldiers.

Common disability among Canadian soldiers  for Fiscal Year 2018–19 were:-

Tinnitus is defined as the perception of a sound in one or both ears or in the head when it does not arise from a stimulus in the environment.  A single indication or complaint of tinnitus is not sufficient for diagnostic purposes. The condition must be present for at least 6 months.  Individuals who experience tinnitus have provided many different descriptions of what the tinnitus sounds like to them. Descriptions include high-pitched sound, ringing sound, whistle, squealing sound, hum, pulse-like sound, etc

Most Indian Soldiers and Veterans will vouch that a great chunk of them are suffering from  Tinnitus or Hearing Loss and also that most soldiers under their command suffered from it – especially those from the Armoured Corps, Regiment of  Artillery, Aviation  and also Mechanised Infantry.

Will the Indian Military hierarchy ever be willing to accept the existence of Tinnitus, Hearing Loss or PTSD?

5 thoughts on “Soldiers’ Pensions and Disability”