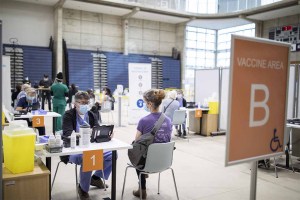 Thousands of Canadians, with a wide variety of experiences and expertise, have volunteered their time to help track COVID-19 cases across the country. The voluntary task force members were assembled by the federal government in late May and early June of last year. The task force then began to evaluate the scientific, technical and logistical merits of potential vaccine suppliers.  Volunteers were called on to help with three key areas: case tracking and contact tracing, assessing health system surge capacity, and case data collection and reporting. 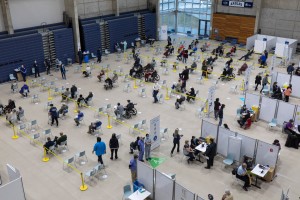 The next task for the volunteer force was vaccination. St John Ambulance was the leading organisation delivering training to those who signed up as volunteers . The only criteria is that the volunteer be between the age of 18 and 69, have at least two or more A-levels or equivalent, be at low risk of Covid-19 and be prepared to undergo a reference check. In October, the Joint Committee on Vaccination and Immunisation recommended the Government introduce a new national protocol to allow non-medics to administer the Covid vaccine. Then, thousands of volunteers with no medical background were also trained to administer the vaccine. The law facilitated more healthcare workers – such as paramedics, physiotherapists or student doctors and nurses, to vaccinate.

The volunteers were assigned the task of: 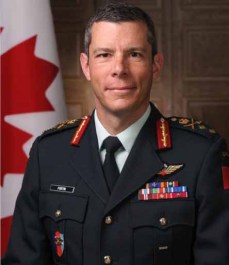 Major General Dany Fortin, with nearly 30 years of military experience is responsible to oversee the herculean logistical effort to ensure vaccines reach  across the country and into the arms of millions of Canadians.  General Dany is one of the best operationally-experienced leaders.  Canadians could not have asked for somebody better; somebody who understands the leadership challenges, the planning challenges and the logistics challenges.  The effort has been underway for some months now, where they have been working out what they predict will be the supply line bottlenecks and difficulties.  Previous US President Donald Trump appointed four-star Army General Gustave F Perna to be the chief operations officer for that country’s ‘Operation Warp Speed’ in May.

On 20 April, I was scheduled for my vaccination at University of Toronto  Mississauga (UTM) campus at 11:15.  I was advised to reach there only ten minutes before the scheduled time.  UTM joined forces with Trillium Health (our public health agency,) to open a mass vaccination clinic in the campus’s Recreation, Athletics & Wellness Centre on March 1.   It’s expected that the clinic could ultimately vaccinate up to half a million people.  UTM offered space and equipment, such as ultra-cold storage freezers, to support these critically important initiatives. 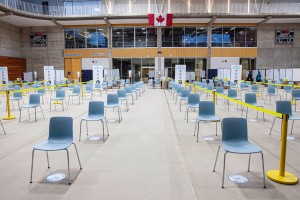 As I parked my car, there were volunteers – mostly university students, to guide us to the vaccination centre.  We were then requested to answer a questionnaire on the Trillium Health website using our cellphone.  Those not in possession of a cellphone were helped by the volunteers using their PDAs.

As we entered the centre, our temperature was recorded and there were about ten counters manned by volunteers who carried out necessary documentation in less than five minutes.  After that we were ushered into the gymnasium where I was administered the vaccine by a sexagenarian lady volunteer. 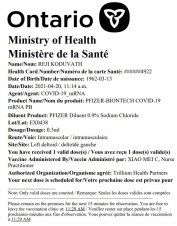 After the vaccine was administered, I thanked her and said “I did not realise that you did it so fast and that too with no pain.”

“Over forty years of experience as a nurse, young man!  Our children and grandchildren are proud that I volunteered for this,” she replied with a smile.

We were then ushered into a waiting area with chairs placed maintaining social-distancing norm.  We had to wait for 30 minutes and at the end of it we were issued with our vaccination certificate bearing the Trillium logo of Ontario Ministry of Health