We were commissioned as Second Lieutenants from the Academies and joined our Regiments – eager to go- like an unguided and nuclear tipped missile.

While commanding our unit, our young officers often remarked that when they messed up something, however serious the matter was – I always said “That’s all – Do not worry – I will handle it now on.”  They now wanted an explanation as to why I neither rebuked them nor got involved in a ‘fault finding mission.’

One day on a lighter moment I gave out the answer.  “When I was a Second Lieutenant, I messed up much more than you guys have put together done till now.”

They prodded me for ‘Dil Mange More’ and I obliged.

I joined our Regiment in 1983 at Gurgaon and during a deployment exercise of our battery, traffic was stopped for the 130mm gun towed by Kraz to pass through the Delhi-Jaipur Highway.  In those days the highway was narrow and followed a different alignment. Superintend of Police of Gurgaon wanted to pass through but was refused and it ended in a physical bout.  Whatever it was – I ended up with a criminal case of attempt to murder using lethal weapons and a Court of Inquiry – both I got saved from – Thanks to our then Commanding Officer, Colonel Mahaveer Singh.

On 31 October 1984, Prime Minister of India, Mrs Indira Gandhi, was assassinated, and her mortal remains lay in state at Teen Murthi Bhawan.  By evening that day, our Battery was tasked to take over security of Teen Murthi Bhawan.  Our Battery Commander was residing at Delhi, hence I marched the Battery and reported to General K Balaram, then Adjutant General, who was in command there.  Anyone of that era would better know the qualities of General Balaram. He was the first and perhaps only AG to be granted Vice Chief status.

Our Battery Commander then – now Veteran Brigadier CM Nayyar, Sena Medal – was a student when General Balaram, Signals, was the Commandant at Wellington. He warned me by narrating many incidents about his conduct – that he even rode his scooter and never his staff car after office hours. I had some great moments with him as he and I smoked ‘Capstan‘ cigarettes then. All shops selling cigarettes had closed down due to riots in Delhi after the assassination. Naik (Corporal) Paul, my driver kept a good stock of it (Still do not know how he managed it) and supplied me regularly with it. Whenever the work pressure got on to General Balaram, he called me to the Operations Room which we had set up inside Teen Murthi Bhawan. He wanted to inhale a deep smoke and a cup of tea – that too the tea in a steel glass our soldiers made. Thus, whenever General Balaram summoned me, it was when the situation at the gate had gone awry or he wanted a break.

We were responsible for the VIP entrance gate through which all heads of states would pass.  Whenever things would go wrong, General Balaram would shout at the top of his voice “Get that Second Lieutenant – only he can solve this chaos.”

In came Yasser Arafat with his four bodyguards – armed to their teeth – and I refused entry for the bodyguards saying that our boys would take care of Arafat’s security.  He gave me a deep glance and ordered his bodyguards to stay put with me.  Even Yasser Arafat did not want to take a chance with a Second Lieutenant!!!

Next on the receiving end was the Japanese delegation led by their Prime Minister Yasuhiro Nakasone. The delegation had over a hundred press people – journalists, reporters, photographers.  I requested their liaison officer that I could only send in five persons with their PM.  The liaison officer pleaded helplessness.  I had to solve the issue.  I assembled all their press crew outside the entrance and when the PM came in, I called out five people and send them inside.  Now there was more chaos with everyone shouting, “My photographer is inside, but I am the reporter” or “My reporter is inside, but I am the photographer.”  I told everyone that whosoever has gone inside will come out with the necessary material and you all can share the same.

Then came a person claiming to be the Commissioner of Police of Delhi. He too was denied entry through the VIP Gate. He shouted at me “Who are you to stop me? What are you doing here?” To this I calmly replied, “If you had done your duty, I need not have been here.”

These were few of the highlights that happened at Teen Murthi Bhawan in those three days.

After a few weeks there was another altercation with a senior police officer from Delhi and again it was the same story of a Court of Inquiry – and again our CO managed to save me.

Now that was that when we were Second Lieutenants! Luckily for me – when I was in command (2002-2004,) the species had become extinct. 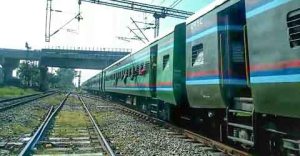 The story of my romance is never complete without the story of the military special. Indian Railways and the military have a close and intimate bonding. The military refer to the special coaches as ‘rolling stock’ and the engine simply as ‘power’.  The Military has its own ‘Movement Control Organisation’ (MCO) with its personnel closely integrated with the railways and located at important railway stations/ headquarters.

This special relationship goes back to the very formation of Indian Railways. One of the main reasons for establishing the railway network was to provide an effective and trustworthy method of transporting large amount of troops from one part of the country to another. The colonial masters found this as an imperative requirement, which enabled the government of the day to maintain control over the vast lands it governed. 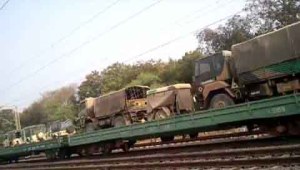 Indian Railways run these Military Special trains all the time. These trains move both in peace and in times war. Some of these trains are freighters only, while others have accommodation for personnel as well. Some military specials carry armed forces personnel for aid to civil authorities, such as earthquake or flood-relief work. Some Military Special trains have rakes formed totally by special ‘Military’ coaches in their own distinctive greens while others have rakes formed by ‘normal’ Indian Railway coaches. Some movements get decided suddenly (such as due to natural or man-made disasters), while other movements are planned well in advance – as per the strategic relocations of operational units of Indian armed forces. The mobilisation plan of military units and formations are made in close coordination with Indian Railways.

I had my first experience of travelling with our Regiment by a military special in 1983, a move from Delhi  by a meter gauge military special for firing practice of 130mm medium guns at Pokhran Ranges in Rajasthan.  We had to move to Pokharan as that was the only Field Firing Range with the Indian Army that offered 30 square km of uninhabited area to fire the guns over 27 km.  Railway lines in Rajasthan then were all meter gauge.  Indian Railways today operate mostly on broad gauge.  The gauge of the railway track is the distance between the inner sides of two tracks.   For broad gauge it is 1676 mm (5 ft 6 in) and for meter gauge it is one meter.

A 24 wagon rake for loading of the medium guns – MBFU – (M – Meter Gauge, B – Bogie Wagon, FU – Well Wagon) was placed at the military siding ramp at Delhi Cantonment Railway Station -12 for loading guns and 12 for Russian Kraz towing vehicle. The gun weighs over 8 tonnes and the wheelbase just about narrowly fits on to the meter gauge rake.  Today with broad gauge rakes, the wagons offer sufficient width to maneuver the guns.

The most crucial part of loading is to mount these guns and Krazes on to the MBFU.  I watched in fascination how the most experienced driver, Havildar Kuriakose, drove the leading Kraz towing the gun.   He drove on to the ramp and then straight through, over the wagons to the last-but-one wagon and halted in such a way that the gun was exactly adjusted in the well of the MBFU.  The gun was unhooked and he drove his Kraz in to the well of the last MBFU.  A slight wavering or error in judgement would have caused the unthinkable. It was a critical operation which only best of the specialist drivers can accomplish. 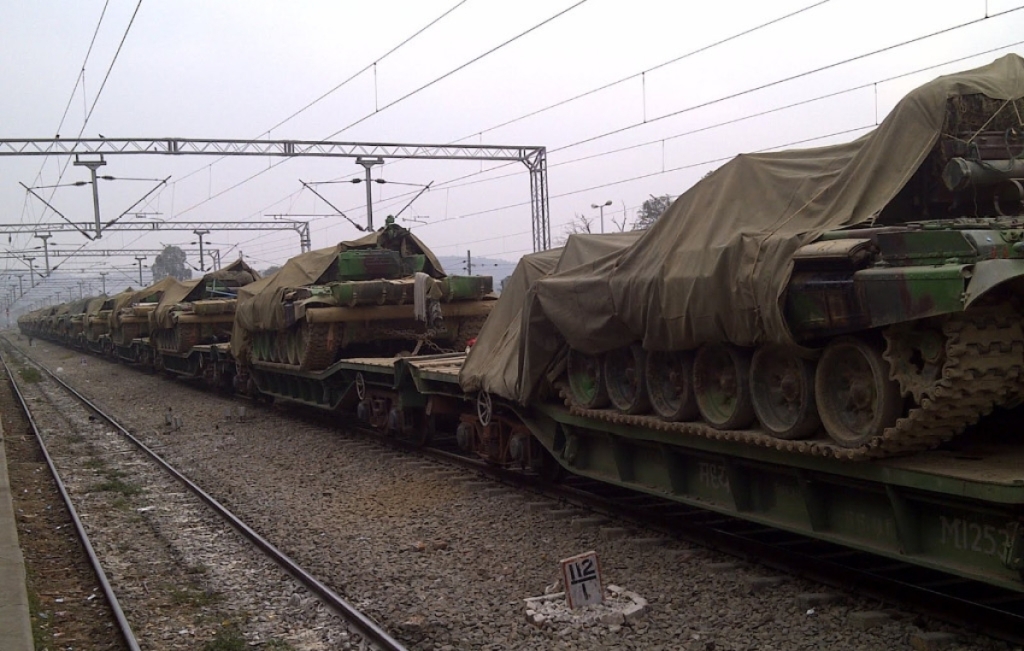 Tank drivers of armoured regiments too face similar predicaments driving onto the MBFU and sometimes end up in mishaps.

By nightfall, the train was formed with 24 MBFU, one first class coach, four sleeper coaches, a military kitchen car and seven wagons for carriage of ammunition and stores.  Now it was an eternal wait at the station for ‘power’- a diesel engine – to tow the train.  They had the crew – loco pilot, his assistant and guard ready, but no ‘power’.  By midnight, an engine was made available after it had towed a passenger train.  There were three halts enroute, each over six hours, all waiting for ‘power’ and after 36 hours, we were at Pokharan railway station.

The last military special train I travelled was while commanding the Regiment in 2002.  Our Regiment was mobilised from its peace location in Devlali (Maharashtra, near Mumbai) on that year’s New Year Eve.  The entire Indian Army had moved into their operational locations after the attack on the Indian Parliament building by terrorists believed to have come in from Pakistan.  The Indian Railways ensured that our Regiment, like all the other units of the Indian Army, were mobilised to their operational locations at super-high priority in two days.  The Military Special trains moved at speeds greater than that of many express trains and were accorded the highest priority.

After ten months, the move back to Devlali from Rajasthan was the opposite. An Army which did not even fire a single bullet, an army which did not fight a war surely had no priorities in anyone’s mind.  Our Divisional Headquarters had entrusted me with an important and critical task two days prior to the move back of our Regiment.  I was given a week to complete the task and fly back to Devlali on completion.  I did not want to miss travelling in the Military Special, that too as the Commanding Officer.  I burnt the midnight oil for the next two days, completed the task, handed it over to the Divisional Headquarters.

On the day of our train’s move from Jodhpur (Rajasthan), our soldiers loaded all the vehicles and equipment on the train.  A diesel engine was connected but now the Railways had the ‘power’, but no crew.  As many Military Special trains were run from Jodhpur taking the army back home, adequately rested crew was at premium.  We waited for 24 hours for the train to commence its journey. Our train stopped at every possible station, even to give way to freight trains.  Now we were the lowest priority in the eyes of the Indian Railways.  The onward move executed in less than two days now took five days on the return leg.

After my premature retirement and move to Canada, I very much miss my passionate association with the Indian Railways. Now, even when I travel in India, it is mostly by air, due to time pressures. Gone are the days of those never ending train journeys. I can only recollect those days with a sense of loss and nostalgia.