Corporal Nathan Frank Cirillo, a Canadian soldier, was shot and killed on 22 October 2014, as he stood guard at the National War Memorial. The shooter was later killed inside the Parliament buildings after firing at least 20 shots. The shooter, Michael Zehaf-Bibeau, a man in his early 30s who was known to Canadian authorities and he was refused travel documents to prevent him from travelling abroad. Zehaf-Bibeau has a record in Quebec in the early 2000s for petty crimes such as possession of drugs, credit-card forgery and robbery. He was also charged with robbery in 2011 in Vancouver. Please click here for a detailed report on the incident is on my blog https://rejinces.net/2014/10/27/o-canada-we-stand-on-guard-for-thee/

Handling of the media in such scenarios and what to cover live, rather most importantly, what not to cover live, needs to be worked out between the public relations officers of the security forces and the media crews. A total blackout of news will only lead to speculation and rumour mongering. Please refer my blog http:/rejinces.net/2015/03/24/terrorism-live/.

After Incident Report by the police authorities on the shooting has raised a few issues about handling such situations in the future. The report must be analysed by all the police forces across the globe, especially in view of the prevailing security environment. The points raised are of at most importance when deploying security personnel on counter-terrorism duties in populated areas. The need for the security forces, police, emergency services, fire force, media crew and bystanders to operate without causing hindrance to each other is of great importance.

In response to the shooting, about 310 officers of the Ottawa police responded with many deploying themselves when they heard about the incident. The difficulty of controlling and commanding dozens of self-deploying officers contributed to confusion about how many suspects were involved. It was the largest reactive deployment of officers to an unplanned emergency in the Ottawa Police force’s history. The sheer unprecedented scale of the police response also contributed to the confusion.

The major challenge for the police commanders managing the force’s response was first to account for all the officers who deployed or self-deployed. It was also critical to ascertain as to where each and every officer was. The report has highlighted this challenge and the need for the police forces to device measures for ensuring better command and control of the entire force on the scene.

Some of the police officers who responded to the shooting wore balaclavas to conceal their identities as they normally work in undercover units. Others were in various states of uniform and some in civilian clothes and this confused the public who, for most of the day, as they did not know how many active shooters or other suspects were involved. Many police officers not in uniform, made it difficult for the public to tell who was a police officer and who may have been an additional shooter. Police officers wearing a balaclava and with a weapon, may be perceived by the public as someone going to inflict harm, especially in a state of crisis. The report brings out the need for the officers who self-deploy to make sure they can be clearly identified as police by their dress.

Eight Hours to Confirm Only One Shooter is Involved

It took only an hour for police to determine that gunman Michael Zehaf-Bibeau was the man responsible for shooting and killing Corporal Cirillo and was killed inside Centre Block on Parliament Hill. Whereas it took Royal Canadian Mounted Police (RCMP) and Ottawa Police about eight hours to confirm that Zehaf-Bibeau was acting alone. The reason was the conflicting eyewitness reports of multiple shooters and suspects, all of which had to be checked out by investigators. Inputs from some witnesses about a second gunman who ran into bushes at the National War Memorial, caused further confusion. It was later confirmed to be the driver of a minister’s vehicle, who ran to hide after the armed Zehaf-Bibeau took command of the vehicle.

Some witnesses also reported seeing multiple people in Zehaf-Bibeau’s vehicle, and others reported seeing what they thought were two suspects with long guns running near the National War Memorial. The second person turned out to be the other sentry who was standing guard with Corporal Cirillo. There was also a 911 emergency call reporting a third shooting scene at a downtown mall, which police reported to the public and later retracted.

All of this contributed to confusion, and it takes a significant amount of time to eliminate that there are no more threats and to announce to the community that things have returned to a state of normalcy.

This aspect of ‘communication gap’ between various armed forces, police forces and emergency services at such crisis situations is applicable world over and many countries are yet to device drills and procedures to close this gap.

To remedy the problem, Ottawa police have ordered new radios that will allow communication with other first responder radios during emergency operations. They have also ordered new night-vision goggles, after the force’s tactical officers found that the current goggles did not work well as they were clearing buildings on the Hill, and that there weren’t enough of them. 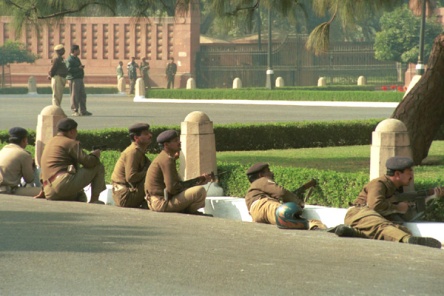 The Indian Parliament at New Delhi witnessed a similar terrorist attack on 13 December 2001. Five terrorists infiltrated the Parliament House in a car with Home Ministry and Parliament labels. The terrorists carried AK47 rifles, grenade launchers, pistols and grenades. The attack led to the deaths of five terrorists, six Delhi Police personnel, two Parliament Security Service personnel and a gardener, in total 14. Afzal Guru was convicted of conspiracy in the plot and sentenced to death by a special court in 2002 and was hanged in Feb 2013.

The events that unfolded in Ottawa in October 2014 was similar to the one that occurred in New Delhi in December 2001. The differences were the self-deploying police personnel and balaclava wearing undercover police officers. The ‘communication gap’ reported in Ottawa would have been faced by the Delhi Police, Parliament Security Service and the National Security Guard (NSG) commandos who ultimately sanitised the area. The information gap would have remained the same, especially regarding the number of terrorist involved and as to whether any terrorist is still holed up.

Despite the event being reported in the international media including live coverage of the operations, the police forces across the globe appear to have not taken any serious note of the event. Rather, they would have never expected it to happen in their own backyards.

Fools learn from their mistakes; wise ones from others’; idiots never.

4 thoughts on “After Action Report on Ottawa Terrorist Shooting”