The Tavistock Agricultural Society hosted the Royal Canadian Mounted Police (RCMP – fondly called ‘Mounties’ by Canadians) Musical Ride on August 15, 2016.  Tavistock, part of Oxford County in Ontario, is a German/Scottish community founded in 1848  by Captain Henry and is famous for its cheese production and fresh meats.   It served as a gathering place for agricultural workers and soon became equipped with taverns, flour mills, blacksmith shops and general stores.  Tavistock is also home to many Mennonite families today.

An RCMP Musical Ride performance is a splendor to watch. It is exciting, full of pageantry, and truly Canadian.  The ride is performed by a full troop of 32 riders and their horses. Their performance consists of intricate figures and drills choreographed to music. These movements demand utmost control, timing and coordination.  It presents a first-hand view of the precision and attention to detail for which the RCMP has become famous for.

The RCMP has become a national symbol of Canada. The courage, sacrifice and steadfast determination of its members to maintain law and order have been the source of many legends.  Many movies and over 300 fiction and non-fiction books have told the tale of the adventures and history of RCMP.  The image of RCMP members on their trusted and faithful horses finds its righteous place on Canadian stamps, coins, souvenirs, and posters.

In early 1869, the Canadian government purchased Rupert’s Land (now Alberta, Saskatchewan, Manitoba, Yukon, and Eastern Northwest Territories) from the Hudson’s Bay Company and renamed it the North-West Territories.  The Canadian Government encouraged settlements in the area to harness the agricultural potential of the fertile area.    In order to establish and maintain social order, North West Mounted Police (NWMP) was created in 1870.

The first officially recorded NWMP Musical Ride was performed in Regina on January 16, 1887 and the first general public display of the Musical Ride was held in 1901.  In 1902, the uniform of the NWMP changed to a more modern uniform of this day.  Two years later, prefix  of ‘Royal’ was conferred on the NWMP by His Majesty King Edward VII, in recognition of its past service.  In 1920, the name of the Force changed from the Royal Northwest Mounted Police to the Royal Canadian Mounted Police and was designated Canada’s national police force.

In the summer of 1921, the RCMP Musical Ride members performed their first public display in Ottawa.  in 1930, the Musical Ride went to England for the first time to perform at Olympia and in London.  The first Musical Ride tour to the United States was in 1934 to New York City, with a repeat performance the following year.

One of the most prominent symbols of Canada is the Royal Canadian Mounted Police (RCMP) ‘Mountie’, wearing his red serge uniform and brown Stetson. The red tunic was chosen to emphasize the British nature of the NWMP, and to make it distinct from the blue American military uniforms. 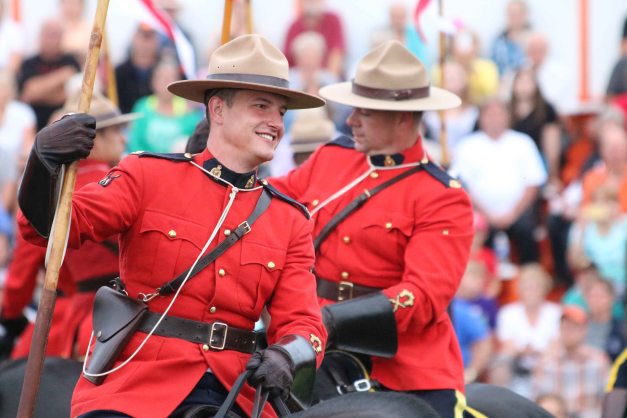 The ceremonial uniform of the RCMP and its horses is perhaps one of the most recognised in the world.  The riders wear the red serge, which consists of a high collared scarlet tunic, a Sam Browne belt with shoulder cross strap and white sidearm lanyard, dark blue breeches with a yellow stripe, brown riding boots, a brown Stetson hat with a wide, flat brim, and brown gauntlets.  It is believed that Sam Steele, one of the original NWMP, introduced the style of hat, as it was a practical item to wear while on patrol, unlike the British pith helmet.

The riders carry lances, while the Officer in Charge carries a sword.  The lance was carried by the men on the Long March as it was believed to be intimidating.

The horses also wear a uniform, which consists of a double bridle with a white neck strap or ‘head rope,’ white brow-band and English style saddles.  The horse’s white head rope was used by the NWMP to tie the horses when dismounted.  The horses’ royal blue saddle blankets, called ‘Shabrack’ are emblazoned in yellow with the fused letters MP.  The horses also have a maple leaf brushed onto their rumps; this is done with a wet brush and a stencil before each performance.

in 1938, Commissioner Wood had ordered the RCMP to use only black mounts after being impressed at how the red RCMP tunics looked against black horses.  Today, the horses are bred primarily for colour, temperament, and conformation. They got to be athletic, with the stamina, substance, and conformation to be able to perform the intricate movements required in the Musical Ride performance. 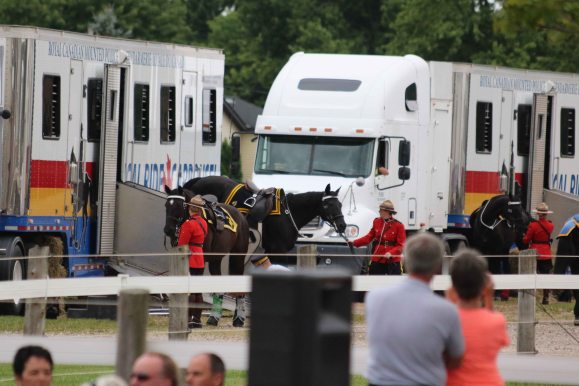 About 200 horses are owned by the RCMP Musical Ride.  36 travel on the Ride each year.  32 take part in each performance, one is ridden by the Officer in Charge, and three extra horses act as replacements if another gets sick or lame.

One of the most familiar Musical Ride formations is the ‘Dome’ that once featured on the back of the Canadian fifty-dollar bill.

The riders demonstrated their lance drill wherein they showcased various movements with their lances.

Another highlight is the ‘Charge,’ when lances, with their red and white pennons, are lowered, and the riders launch into the gallop.

The conclusion is the ‘March Past,’ performed to the strains of the “RCMP Regimental March”  and a salute to the guest of honour.

After the much-anticipated performance was over, the troops lined up facing the fence so that young and old could pet the horses and ask the riders questions about their experiences as members of the ride and as RCMP.