In this travel episode let me take you into the intricacies of the fascinating world of port wine. Let me submerge you in wine as it were. For the wine buffs amongst you, it would be particularly interesting.

On reaching Pinhão, we drove straight to Croft Winery founded in 1588.  It is the oldest firm still active today as a Port wine producer. The company is renowned for its Vintage Ports as well as for its range of wood aged wines.

We were ushered into one of the ‘Lagares’ where a Croft Associate briefed us about Port and how it is bottled from grapes that grow on their vines. A ‘lagar’ is simply a wine press.

The grapes are harvested by hand in the second half of September.  They are carried to the winery where they are crushed to allow the fermentation to start. Fermentation is the process whereby the sugar in the grape juice is converted into alcohol by yeast.

Once fermentation is under way, care is taken to ensure that the grape skins are kept in contact with the fermenting juice so that their colour, tannin and flavour are released into the wine.  Traditionally this is achieved by treading the wine by foot in wide granite tanks called ‘Lagares’.  Foot stomping to tread wine is employed nowadays only by some wineries like Croft. In most others, foot treading has been replaced by mechanical methods.

Foot stomping ensures that the grape seeds do not get crushed.  Pressure from human foot is gentle enough so that the seeds do not break, which can adversely affect the taste of the wine.  In the most wineries around the world, foot stomping grapes for wine production is not resorted to as they do not seem to like mixing feet with wine. However, during various festivals, foot stomping of grapes is resorted to, but the end product is not used for wine production.   When about half of the natural sugar in the grape juice has been turned into alcohol, the treading stops and the skins are allowed to float to the surface of the ‘lagar’.

The fermenting wine is then drawn from under the skins into a vat.  As the fermenting wine runs into the vat, grape spirit – a colourless, neutral spirit distilled from wine – is added to it. This raises the strength of the wine and stops fermentation. As a result, much of the natural grape sugar is preserved in the finished Port.   This technique of adding a small amount of grape spirit at some point in the wine making process is called fortification.  Hence, Port is a fortified wine. When you want the wine sweet, the spirit is added earlier and when the desired product is required to be ‘dry’ the spirit is added later so that there is little or no residual sugar.

Port houses own cool dark ageing warehouses called ‘lodges’.  In Pinhão, the temperate climate of the coast ensures that the wines age slowly and harmoniously. One of the unique properties of Port is its ability to gain in richness and flavour over very long periods of ageing in wood. This is partly because it is fortified and partly because it is a wine of extraordinary concentration and aromatic potential. 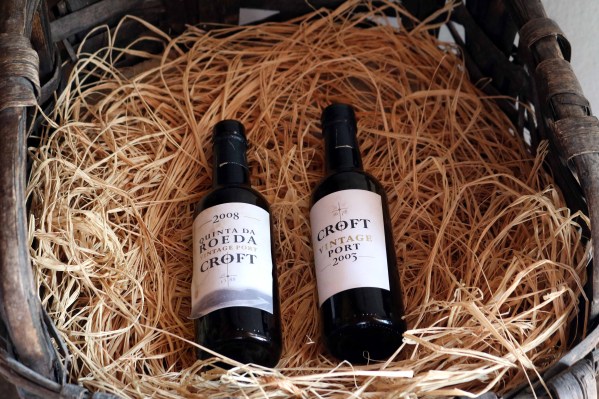 Broadly, Port falls into two categories: Wood-aged and bottle-aged. The vast majority of Ports are wood-aged, meaning that they are fully matured in oak casks or vats and are ready to drink when bottled. Bottle-aged Ports, are those that spend only a short time in wood and then continue to age in bottle. Vintage Port is by far the most important category of bottle-aged Port, as it represents only the finest wines of the best years and the amount produced is very limited.

Vintage Port is the finest and rarest of all Ports, the most sought after by wine lovers, collectors and investors. It is a selection of the very best wine from a single exceptional year and represents only a very small proportion of the crop. A bottle of Vintage Port must always be stored lying down so that the cork is in contact with the wine and does not dry out.

Port is declared a ‘Vintage’ by the wine regulator Instituto dos Vinhos do Douro e Porto (IVDP) when they feel that the wines which were produced in a given harvest year possess the characteristics of a Vintage Port.  IVDP ensures that the wine is produced, aged and bottled according to the regulations which define Vintage Port.

Vintage port remains in wood for only two years, usually in a large vat. It is then bottled and continues to age for many years or decades in bottle, gradually developing the aromas which are the hallmark of a great mature Vintage Port.

During the ageing process a sediment or crust will form in the bottle. Before serving a Vintage Port it is often necessary to decant it to separate the wine from the crust. Decanting also brings the wine in contact with the air, allowing the aromas of the wine to open out after the long period during which the wine has been enclosed in the bottle. 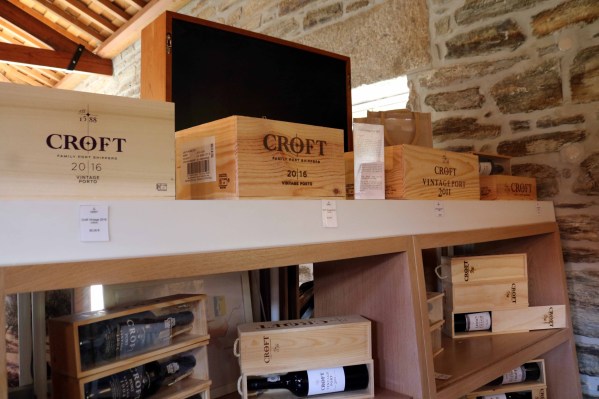 The tradition of ‘laying down’, or putting away some bottles of Vintage Port for a child when it is born derives from the fact that a declared Vintage will last for the child’s entire lifetime, reaching maturity when the child is old enough to appreciate and enjoy it.

A bottle of wood aged Port must be stored upright in a dark, cool place, if possible away from direct light.  There is no need to decant a wood aged Port. It will remain in good condition for six weeks or more after the bottle has been uncorked for the first time.

After the briefing, we were ushered outside to the egg shaped concrete vats.  These vats provide temperature consistency for fermentation.  Fermenting grape juice in concrete is a pretty ancient practice.  The minuscule little air pockets across the surface of concrete allows the fermenting juice to breathe much in the same way that oak does, but without borrowing any flavors. 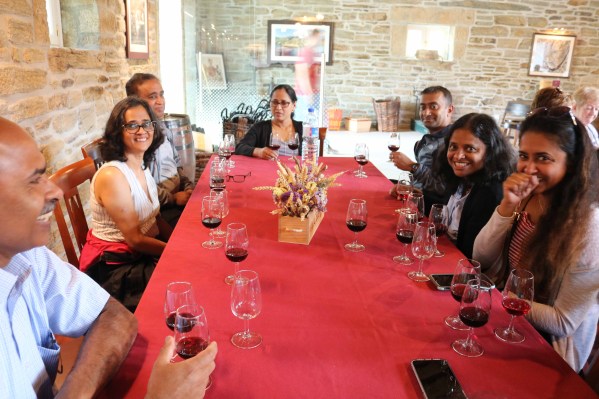 We were then taken to the wine tasting gallery to devour three special Port wines: Croft Pink, Ruby Reserve and a Ten-Year-Old Tawny.  Even though none of us were wine connoisseurs, we learnt a lot about wine and had lots of fun. 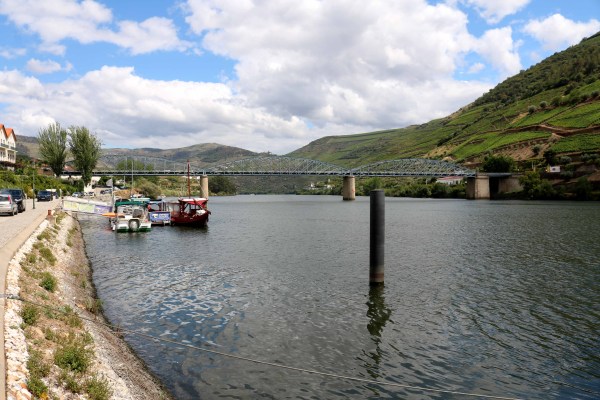 We then drove to the jetty on Douro River for a cruise in a small boat.  The boat sailed under Pinhão’s famous bridge, designed by renowned French architect Alexandre Gustave Eiffel, best known for the world-famous Eiffel Tower.  We sailed along admiring the patterns weaved by the vineyards on the terraced hill slopes.

We returned to Porto by late evening, had dinner and retreated to our hotel room to prepare for our early morning flight out of Porto to Lisbon, the capital city of Portugal.

2 thoughts on “The Journey of Port”