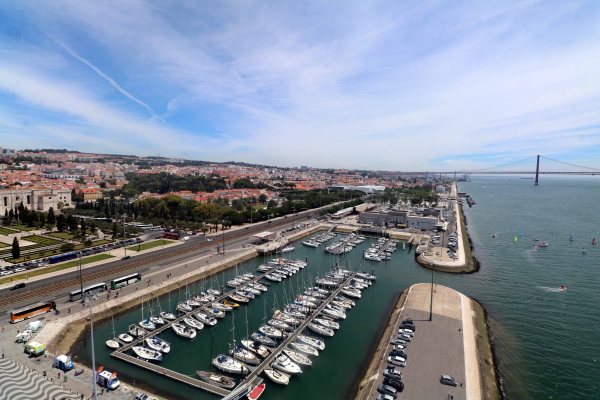 On June 20 we landed at Lisbon Airport and drove off to our hotel.  After lunch we decided to explore various landmarks of Lisbon on foot.  Our first stop was Rossio Square. 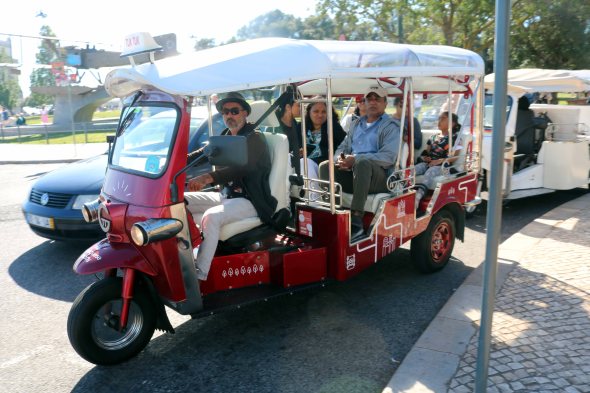 On reaching Rossio Square we were greeted by Tuk-Tuk (Auto-Rickshaw) drivers who carry passengers through the cobblestone paved narrow twisting alleys of Lisbon.  From 2017, by law, all Tuk-Tuks had to be electric and could operate only until 9 PM.  Obviously, they are unpopular with the city’s taxi drivers who see them as a threat to their livelihood. 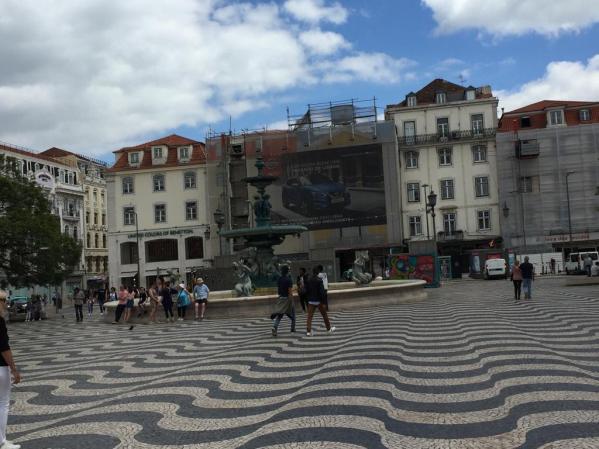 Rossio is the liveliest square in the city, where people stop to sit and relax, or for a drink at the several cafés with outdoor seating.  The Praça dom Pedro IV is the official name of the square after the inauguration of the statue of Dom Pedro IV in 1874 but Lisbon’s residents have never taken to the name and still refer to the square as Rossio meaning ‘common land.’ 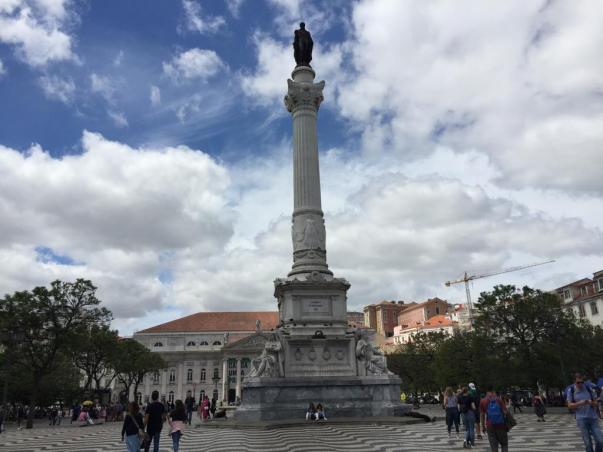 On either side of the square are two baroque fountains, and in the center is a 27 meters high monument.  It consists of a pedestal with marble allegories of Justice, Wisdom, Strength, and Moderation – qualities attributed to Dom Pedro IV – whose statue stands on top of the monument.   It is widely believed that the statue in the centre of Rossio is of Dom Pedro IV but legend has it that the statue is that of Emperor Maximilian of Mexico. Maximilian was assassinated soon after completion of the statue and the unwanted statue was sold to Lisbon at a fraction of the cost as both Dom Pedro IV and Maximilian were near lookalikes. 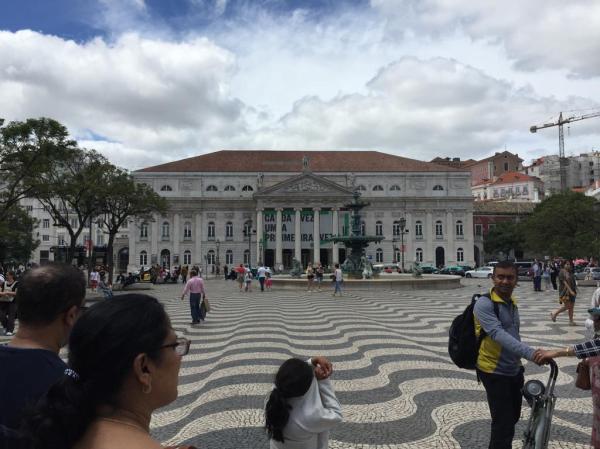 On the North side of the square is the Dona Maria II National Theater, a monumental neoclassical building built in the 1840s. The portico has six Ionic columns (originally from the Church of St. Francis, destroyed in the 1755 earthquake), and crowning the pediment is a statue of playwright Gil Vicente.  The theatre was built in 1846 on the site of the old Palácio dos Estaus palace, initially constructed in 1450 and was used by the Portuguese royal family to host foreign dignitaries.

The wave pattern stone paving was added to Rossio during the 19th century and was designed to resemble the oceans but more often disorientates late night revelers. The two baroque fountains, imported from France, were installed at the same time as the statue of King Pedro IV (1870).

From Rossio we walked to Praça do Comércio, (Commerce Square), Lisbon’s central point. It was built on the site where the old Royal Palace destroyed by the 1755 earthquake stod.  It is said that one of the motivations for the monumental sculpture’s prominent location was to honour King Joseph’s reconstruction efforts after the earthquake of 1755.

The 14-meter-high monument consisting of a bronze equestrian statue that depicts King Joseph I riding his horse, with several snakes at its feet on a large, richly decorated, lime stone pedestal.  The statue is the first cast bronze statue in Portugal and is the oldest public statue of Portugal. 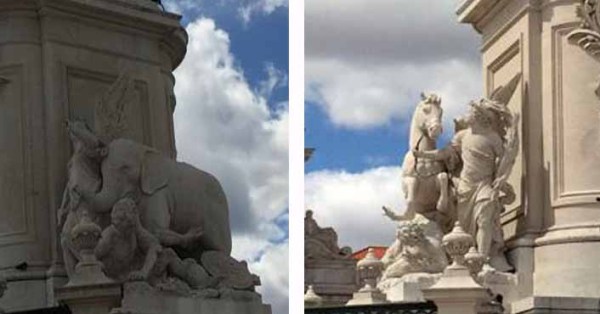 The King’s statue stands on a pediment, flanked by sculptures of Triumph and Fame, which symbolise the submission of four continents to the Portuguese.  On the left is Fame driving an elephant – representing  Asia – over a human figure – representing Africa.  On the right is Triumph, leading a horse – depicting Europe –  over a human figure – depicting America. The depiction is strongly suggestive of Portuguese domination of the world during the middle ages.

The southern end of the plaza is open and looks out onto the Tagus River. The other three sides have yellow-coloured buildings with arcades all along the façade. When the square was first built,  commercial ships would unload their goods directly onto this square, as it was considered the ‘door’ to Lisbon.

Our next destination was Santa Maria Maior or Se Cathedral, a twelfth century Cathedral.  Surprisingly it survived the 1755 earthquake, which left only a part of it in ruins. The solid and imposing Se Cathedral is Lisbon’s most important and iconic religious building. The exterior of the grand old church resembles more that of a military fortress than that of a church, with massive solid walls and two imposing clock towers.

Inside Gothic arches extend to the faulted ceilings and medieval statues and decorative altars fill the alcoves. To the rear  are the ancient cloisters, which were constructed directly on top of a ruined mosque built by Arabs, dating back to the period of the Crusades. 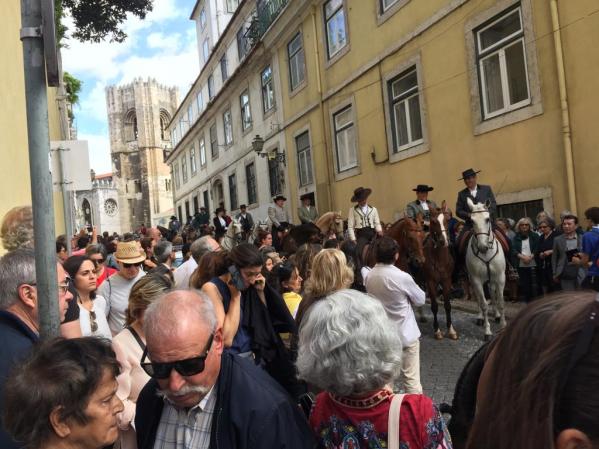 Every year in June, Lisbon honours St. Anthony of Padua, the city’s patron saint.  Lisbon almost entirely shuts down for one month, with locals decorating the street and plazas in bright colours.  In rest of Portugal however, he is considered the ‘matchmaker’ – a patron saint for singles.  Some people also call it the Festival of Sardines.

In the month of June, the smoky scent of grilled sardines fills the Lisbon air and in every corner one will find someone cooking a batch of sardines on a grill.  People also gift pots of basil to their beloveds.

We were lucky to witness the horse parade of over fifty well manicured horses, with men and women riders dressed in traditional Portuguese attire. 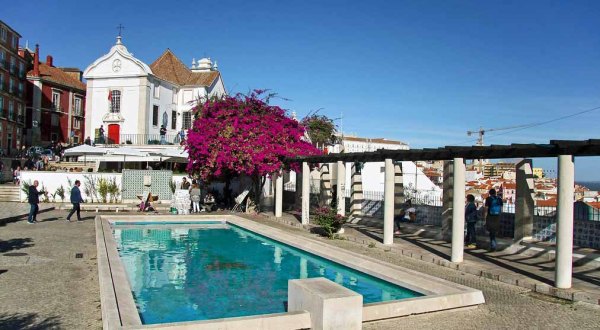 Our final destination for the evening was The Miradouro de Santa Luzia (Saint Lucia’s Viewpoint), one of the best places to view the city on a clear day.  We enjoyed the view caressed by a cool breeze from the Tagus River. Shady trellises and bougainvillea  provide protection from the intense sun. 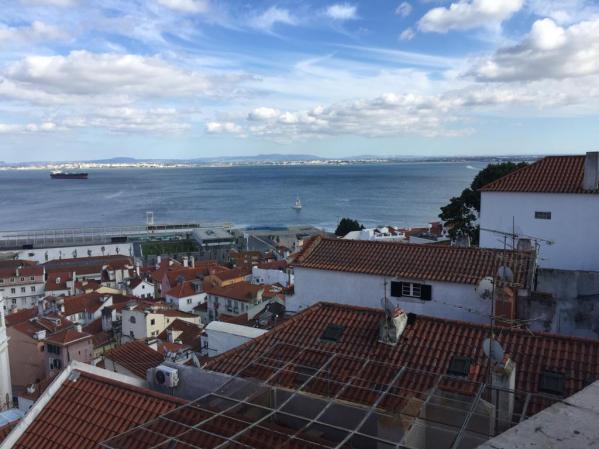 The red-tiled roofs of the old downtown area below us, in the backdrop of the Tagus River meeting the Atlantic Ocean and visiting cruise ships provide a picturesque setting. 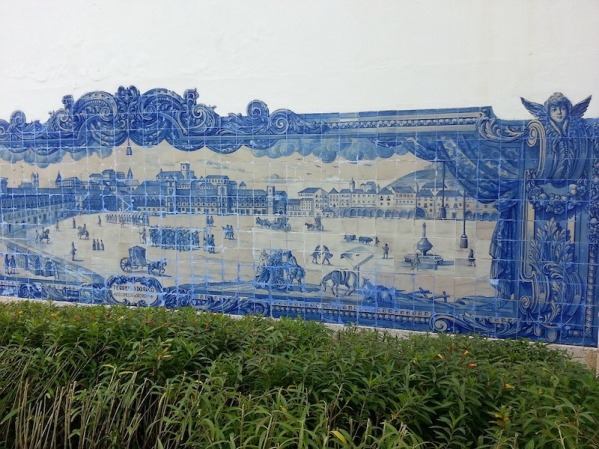 Near the viewpoint is the Church of Santa Luzia with blue pictorial tiles depicting the city’s Praça do Comerçio (Commerce Square) dating back to the 1755 earthquake.

From Saint Lucia’s Viewpoint, we walked for about 25 minutes to reach our hotel for a much deserved rest and dinner and also to prepare for a long journey to Sintra, a UNESCO World Heritage Site, about 30 km North-West of Lisbon.

One thought on “Lisbon: Lisboa – Meaning a ‘Safe Harbour’”