On June 21, early morning we walked from our hotel to Rossio Railway station to catch a train to Sintra, a picturesque town that boasts of extravagant palaces, ancient castles and stunning scenery. Located about 25km West of Lisbon, is connected by a regular train service.

The trains to Sintra are operated by the national train company of Portugal –  Comboios de Portugal (CP).  The train passes through non-descript residential housing areas that surround Lisbon

As we alighted from the train and exited the station, we were swarmed by touts selling tuk-tuk tours, guided tours, and other means of transport to explore the hills of Sintra.  We opted to catch the 434-tourist bus.

From where the bus dropped us, we could visit the Pena Palace and Moors Castle, but we decided to visit only the castle as we had planned to visit Quinta da Regaleira.

Pena Palace boasts of painted terraces, decorative battlements and mythological statues.  The restored palace reflects its decor of 1910, when the Portuguese nobility fled to Brazil to escape the revolution. The palace sits atop a rocky outcrop surrounded by forested grounds. The base structure of the palace is formed around an abandoned monastery, and remnants of the original structure is still visible.  In 1996 the palace underwent an extensive restoration and its exterior walls were restored to its original colours.

Moors Castle is located atop the hills of the Serra de Sintra and is a very challenging up-hill hike to reach its top.  It is a classic ruined castle with high fortified stone walls, treacherous ramparts and massive battlements.

The vantage points of the castle offers wonderful panoramic views over the hills of the Serra De Sintra and the plains stretching West to the Atlantic Ocean.

The castle dates back to the 8th century and was built by the invading Muslim Moors from North Africa. The castle dominated the area as it provided a suitable vantage point over the River Tagus and offered protection to the town of Sintra.

During the Crusades in 1903, King Alfonso VI managed to capture the castle, but held on to it for a year only.  The castle flourished between the first and second Christian crusade and this was regarded as the high point of the castle’s history.  The fortifications of the castle were greatly enhanced but were not tough enough to repel the second much larger Christian crusade of 1147. 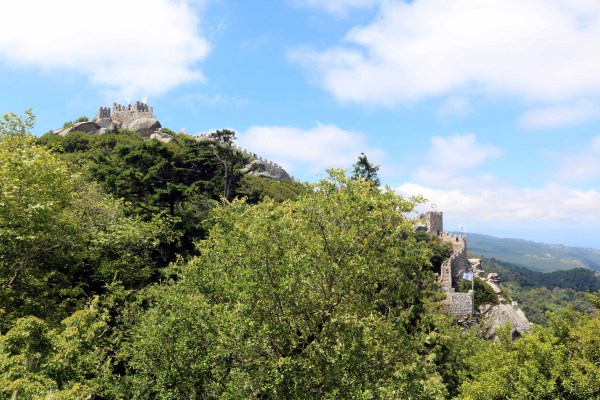 Significance and importance of the Sintra castle reduced over the centuries and by the 15th Century the Jewish settlers were the only inhabitants. When the Jews were expelled from Portugal,  the castle was completely abandoned. In 1636 a lightning bolt caused a massive fire that wrecked the central keep while in 1755 the devastating earthquake leveled much of the walls and battlements. The Moors castle in this era was so insignificant that it was not even considered in the plans to rebuild after the earthquake.

King Ferdinand II, King of Portugal, obsessed by art, drama and the good life, transformed the entire Sintra region.  The castle was reconstructed in 1840 so that he could view it from his beloved Pena Palace.

As we climbed up the pathway to the castle, out first stop was at the Silos.  These are secret caves cut into the rocks to store grains and pulses.  These silos were built by the Moors who built the castle.

We then stopped at the site of Islamic Houses.  These remains are of the foundation of houses and silos on the South-Eastern slopes of the hill occupied by the Muslims.  During excavations, typical artifacts from 10th to 12th Century Islamic culture were discovered.  Some remains of Neolithic (5000 BC) occupation were also identified during the excavation.

We then climbed up to the Church of St Pedro.  This was the first parish church of Sintra constructed by King Afonso Henriques on recapturing the castle in 1147.  In 1840, King Ferdinand II transformed this church into a romantic ruin.  It now houses the Interpretation Centre of History of the Castle and houses artifacts recovered during the archeological excavations.

In the process of transforming the church in 1840, the cemetery was damaged.  King Ferdinand II built this tomb to lay the remains that had been unearthed.  Its headstone bore the engravings of a Cross and a Crescent with an epitaph ‘What man has assembled only God can set apart‘ meaning that it was impossible to distinguish whether the human remains were that of a Christian or a Muslim.

We then climbed up to another excavation site.  This was a Christian tomb excavated from granite alongside a Muslim silo.

Our next halt was at the Cistern of the castle.  This vaulted reservoir had a storage capacity of 600 cubic meters of waters.  The masonry signs on the granite blocks indicate that construction commenced in the 13th Century.  The water in this cistern has not dried up ever as per records.  The myth has it that a Moorish King is buried underneath this cistern. 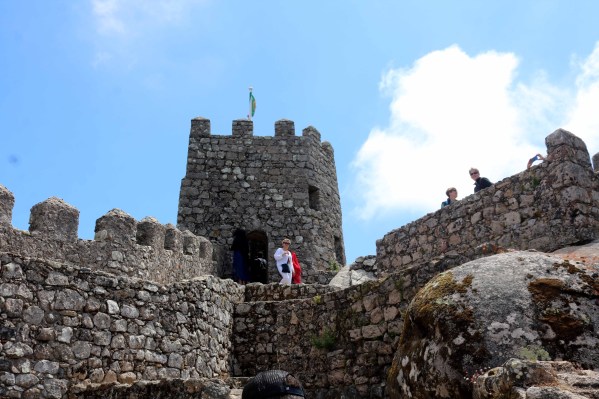 We then moved to the Castle Keep, the strategic centre of the castle.  As it stands on one of the high points, it is visible from the surrounding plains and also from the Atlantic Ocean. 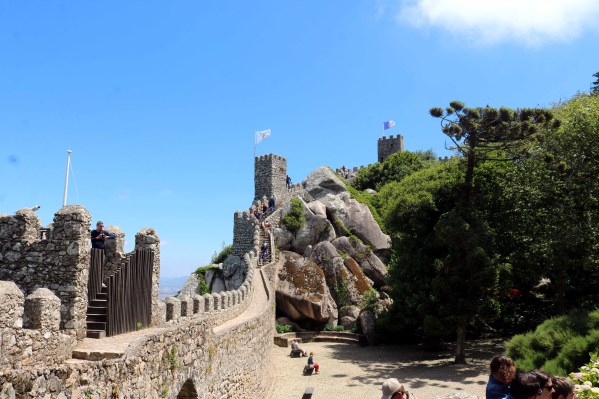 We walked  to the Door of Betrayal – a small gate that allowed discreet access to the exterior during a conflict or to be used as an escape route.

After five minutes of steep uphill climb, we reached the Royal Tower.  This tower offered a privileged view of Pena Palace and would have been one of the favourite locations of the art-lover King Ferdinand II. 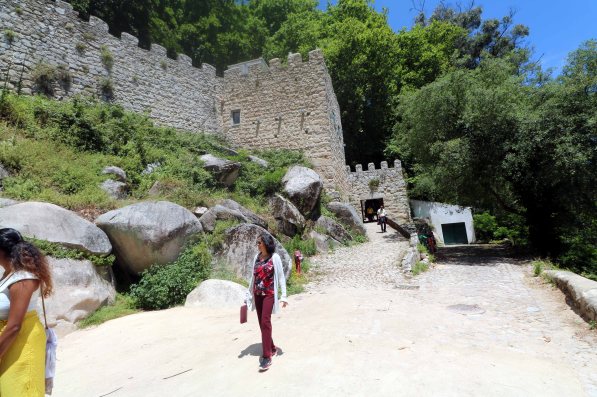 From the Royal Tower we commenced our descent to the base of the hill.  On our way  we came across the Second Circle of Walls, much below the main castle walls.  As the castle offered security to the locals from invaders, many settled on the slopes of the hill.  In order to protect the people, their animals and crops, this second wall of defence was built.  The extent of the wall indicates that a sizeable population inhabited these hill slopes.

From the second wall we walked 15 minutes to the bus stop to take the bus to Sintara and further to Quinta da Regaleira Palace.