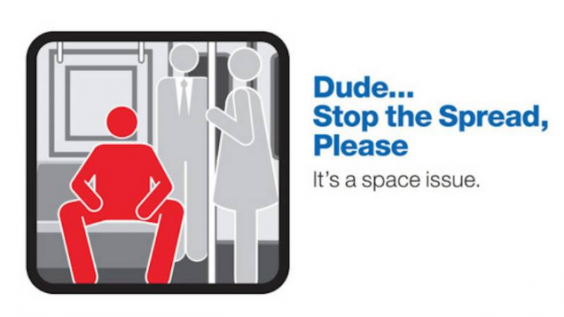 During our Sainik (Military) School days (boys only) in Grade 8, I had an opportunity to play a girl’s role in a play.  Ms Sheela Murphy, our English Teacher was in charge of the event and she really decked me up to be a beautiful girl.  The photograph of me sitting down came out after a few days and Ms Murphy said “I have always been telling you to sit with your legs closed.  Ladies always do so. While on stage, men should also keep their knees as close as possible, else it becomes an eyesore.”  From that day I made efforts to ensure that whenever I sat,  my knees were together, especially with  legs visible.

Recently I read an article about ‘Manspreading’ by our friend Suresh Nellikode, which was published as a middle in the New Indian Express newspaper dated October 25, 2017.  This made me analyse and I realised that menspreading is a habit of men, whether in a public transit or in their homes or offices.  Some men take extra care to avoid manspreading while being photographed, especially in the group photos.  Sometimes it may be the fault of the cameraman to have shot the image while the man was in a manspreading position.  Ultimately, the responsibility to avoid it lies with the man being photographed.

“Manspreading”  is an act of a someone, usually a man, taking up two seats in a public space by spreading his legs.  This has been a cause of inconvenience to many, one of them could have taken a seat had the man not manspread.

Oxford Dictionary (online) describes manspreading as a practice whereby a man adopts a sitting position with his legs wide apart, in such a way as to encroach on an adjacent seat.

Does man’s anatomical structure make him manspread?  Is it a natural act by a man to avoid testicular compression from his thigh muscles?  Is it  natural for a woman to sit with their knees close together and ankles crossed, but the same may be painful for a man?  Is it that God gifted women with a wider pelvis and thighbones resulting in  sitting with their knees close together as a stress-free position?  Is it the male ego that makes a man to manspread?  Is it that the parents and teachers never corrected a boy while he manspread?   These were the questions that came to my mind after reading Suresh’s middle.

New York police officers arrested two men on the charge of manspreading on the subway in May 2015, for they were taking up more than one seat and therefore inconveniencing other riders.  Now Spain’s capital city Madrid has taken a stand against manspreading, banning men from indulging in the rude leg extending move on its trains and buses..

If we want perfect, equitable commuting, why not legitimise that all able-bodied persons, both males and females,  between the age of 19 (voting/ marriageable/ drinking/ smoking) age and 30 stand while traveling on public transit?

Keeping your legs planted on the floor, with the knees a feet apart would be the most ideal way for men to sit.  Men may also lock their heels or cross their legs, but sitting with straight legs works best for most situations.  Ensure that one does not over project his genitals as monkeys and chimps are known to display their genitals to act more aggressive.  This  many a times looks grotesque, especially when one is seated on a stage or facing a camera.  While crossing legs, men often cross their left leg over their right – because …. Please click here to read my Blog and you may be able to reason it out.

Are we going to finish at manspreading? Are there more issues that the women are concerned about men’s behaviour?   ‘Manslamming’ is one feminine concern when men do not move out of the way of women on the sidewalk fast enough to give them way.  Then is ‘manterupting’ where the women are shouted down by men at conferences/ meetings, shopping malls, etc.  Then comes ‘Mansplaining’ where the women describe men who infringe on their feelings of narcissistic superiority; and the list will go on, adding new terms in times to come.