CN (Canadian National) Tower is a 553.33 m-high (1,815.4 ft) concrete communications and observation tower in Toronto,  Canada.   It was completed in 1976, becoming the world’s tallest free-standing structure and world’s tallest tower at the time. It held both records for 34 years until the completion of Burj Khalifa and Canton Tower in 2010. It remains the tallest free-standing structure in the Western Hemisphere, a signature icon of Toronto’s skyline, and a symbol of Canada, attracting more than two million international visitors annually.  Its name “CN” originally referred to Canadian National, the railway company that built the tower, following the railway’s decision to divest non-core freight railway assets.

The idea of the CN Tower originated in 1968 when the Canadian National Railway wanted to build a large TV and radio communication platform to serve the Toronto area.  As Toronto grew rapidly during the late 1960s and early 1970s, multiple skyscrapers were constructed in the downtown core and the reflective nature of the new buildings compromised the quality of broadcast signals necessitating new, higher antennas that were at least 300 m tall.  The CN Tower opened on 01 October 1976, but soon microwave communication and terrestrial TV/Radio transmissions were overtaken by satellite communication.  Now the tower is more of a tourist attraction and may be raking in more money than what it was intended for.

The 1,776 steps of the CN Tower’s main stairwell are climbed by over 20,000 people annually during two fundraising stair climbs for the World Wildlife Fund (WWF) and the United Way raising well over $3 million for charity every year.  A trek up one of the tallest buildings in the world, the CN Tower Climb is one of the steepest physical challenges in the city.  Climbers face 144 flights of stairs with 1,776 steps, but the knowledge that all that hard work benefits a worthy cause like the United Way or the WWF, and with a bit of help from rest spots along the way, it’s sure to be a feat for over 10,000 climbers, who will look back on with pride.

Our family decided to undertake the feat on 21 April 2012, the day of the WWF climb.  We all practiced for a week by climbing up and down the two flights of stairs at home and going for a jog in the evening.  Our children were enthusiastic about the feat, but were a bit scared about their parents.  Appa had left the army eight years before and added a few inches around his waist and Marina, a school days Kerala State 400m winner, had been out of physical activity for a long time.  So each one decided to take along each of the parents and proving Sigmund Freud correct, our daughter Nidhi decided to accompany Appa and our Son Nikhil decided to go along with Marina.  All set we took off early morning and reached the CN Tower.  We had to shed all our jackets at the registration counter and loose objects like coins, keys, cell phones, water bottles etc are not allowed because in case anything falls off, it is sure to hurt someone climbing below.

There were thousands of people either climbing the tower or queuing up at the registration counters.  We commenced our climb after a frisking for loose objects.  Marina was bit slow to begin with and Nikhil kept company.  Nidhi and self started well with Nidhi leading the way, until about 100 flights of stairs and then realised that Appa still had it in him and I reached the top, first amongst us in about 25 minutes.  Our daughter followed a few minutes later.

The organisation enroute is worth mentioning.  There is a para-medic every four flights of stairs to take care of any medical emergencies.  There were posters made by school children, bringing out the importance of wild life conservation and also about the climb, placed at the landing area after each flight.  As we reached on top, a bottle of water was handed over to each participant.  There were climbers of all ages – from kids to grandparents, differently-able, amputees, veterans, etc.

After about 20 minutes we saw Nikhil pushing Marina out of the last step.  I asked him as to how they took 45 minutes to climb up to which he Marina said that Nikhil was all the way pushing and prodding her, and waiting with her when she took breaks and she would not have completed this climb without his assistance.  I felt really happy about his deed to take care of his mother and I asked him as to why he did not leave her and climb in good time as she would have somehow managed her way up.  To this Nikhil said that this may be the only time when Marina would climb the tower and he can do it in a shorter time later.  It was real moment of pride for all of us and I said to him that he did a great job in taking care of his mother and many teens would not have done so and I see a bright star in the sky in you. 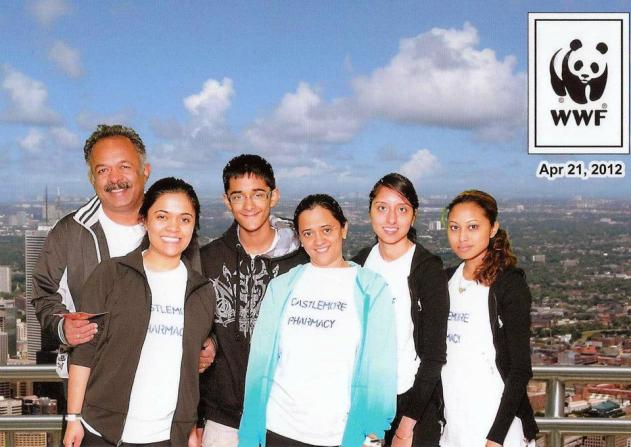 On reaching home in the afternoon, an Indian family friend called us to enquire about the climb.  He asked as to how much we paid and I said that we had to pay $100 per climber as charity to WWF.  To this he said that going up the elevator costs only $25 and you pay $100 to strain yourself and climb all the way.  I did not say a word in response.

In the evening another Indian friend wanted to know as to why I took the entire family for such an ordeal (in case you are mad, you could have done it yourself), and I said that it was aimed to boost self confidence and leadership qualities in children and also to encourage charity for a cause like WWF.  To this he said that he did not understand the connection between climbing 1776 steps and leadership qualities to which I did not respond.